Synthetic Aperture Radar Market size exceeded USD 4 billion in 2019 and is estimated to grow at a CAGR of over 10% between 2020 and 2026. The integration of SAR with aircraft, UAVs, and satellites allows them to gain data with a resolution of up to less than 5m. Analyzing these data can provide important information for various operations. 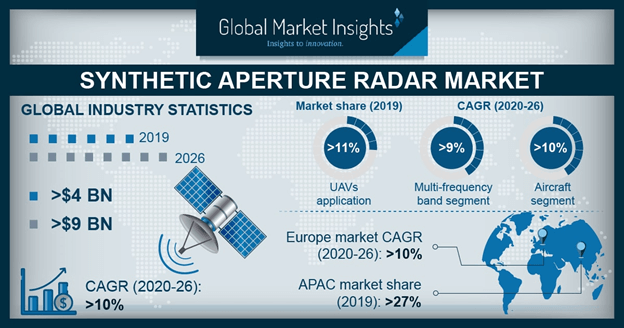 Industry players are continuously upgrading data analysis tools through which they can provide more precise and accurate information. With this information, various agencies and government bodies can pinpoint natural reservoirs and other environmental changes. Third-party contracts and collaborate with SAR providers to increase profitability through data analysis.

Rising investment by various government and independent organizations in the synthetic aperture radar industry is providing regional accelerations. Various initiatives by government, such as Make in India and Made in China, to improve in-house manufacturing capabilities will also provide a positive impact on the global market size.

The defense segment held over 58% market share in 2019 and is expected to continue its dominance over the forecast timespan. This is attributed to increasing surveillance activates carried out by various countries due to rise in geopolitical tension. For instance, in August 2019, a Russian spy plane was spotted in Chicago (U.S.) to monitor activities. The rise in insurgencies between the two countries has accelerated surveillance activities, improving market opportunities.

Miniaturization of SAR systems for both commercial and defense applications 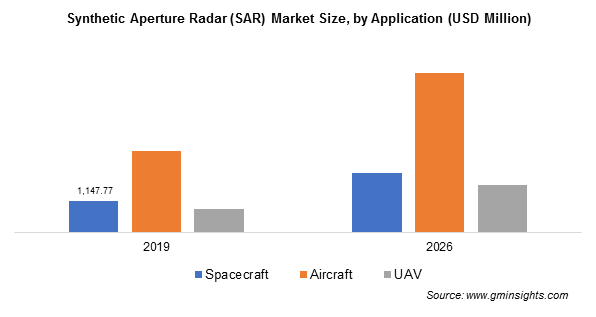 The aircraft application segment in the synthetic aperture radar market captured maximum industry share, accounting for over 60% in 2019. The wide scope of application of SAR technologies in commercial & defense aircraft pertaining to C4ISR applications will support market growth.

For instance, in September 2017, IMSAR enhanced its product offering by adding an extended ranger version of its miniaturized synthetic aperture radar termed as NSP-5 ER. The new radar will be operational from much higher altitude with faster aircraft. The primary target market of the product is large aircraft but can also be deployed on UAVs.

The Unmanned Aerial Vehicle (UAV) segment in SAR will experience the highest growth potential due to versatile scope of applications, elimination of the onboard human requirement for operations, and low cost of manufacturing & operations. Various industry participants are engaged in developing low-cost highly accurate UAVs, which can be used for defense and commercial purposes.

For instance, in May 2019, the Council for Scientific and Industrial Research (CSIR) announced that they are in the process of developing synthetic aperture radar (SAR) technology for aircraft, UAVs, and satellites. 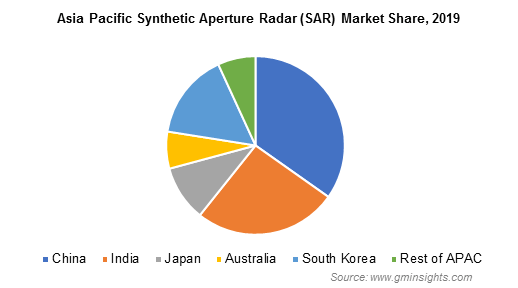 The growth in satellite launch in Asia Pacific to cater rising demand of effective surveillance and communication network is propelling the market revenue. Collaboration with various countries to accelerate existing space programs and improving in house capabilities will remain major strategies within space segment.

For instance, in January 2020, China launched Long March 2D rocket from Taiyuan Satellite Launch Center. The rocket included four satellites among which two were Chinese satellites whereas other two were from Argentina. China plans to launch 50 satellites as of 2020 as compared to 34 launches in 2019.

For instance, in May 2019, ICEYE signed a strategic Memorandum of Understanding (MoU) with Asia Pacific Satellite, Inc. that will provide SAR data to the South Korean market. The rising number of satellites launches by companies, such as SpaceX, Rocket Lab, Planet, BlackSky Global, and UrtheCast, has propelled the market demand. 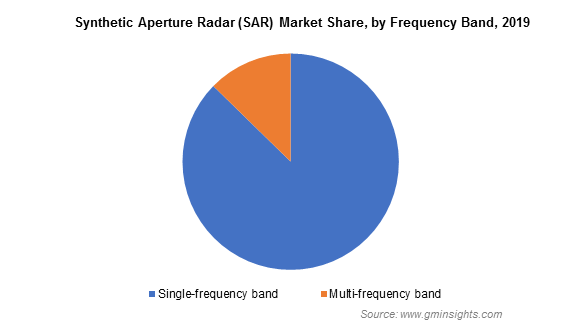 The single-frequency segment will dominate with over 80% market share in 2019 due to its simple operations and accurate information. The development of advanced equipment capable of capturing and analyzing multiple frequencies will promote the multi-frequency segment. For instance, the NASA-ISRO mission, termed as NISAR and expected to be launched by 2022 is a multi-frequency radar capable of operating on L and S bands.

The major industry players operating in the synthetic aperture radar market are undergoing collaborations and joint ventures to increase their geographical reach and create new profitability avenues by expanding their market share.

For instance, in November 2019, ICEYE entered an agreement with RS Metrics to provide data on iron ore inventories to the commodities market. RS Metrics demonstrates expertise in satellite imagery and geospatial analytics, whereas ICEYE demonstrates capabilities of data collection through a constellation of three small SAR satellites in low Earth orbit.

According to the Memorandum of Understanding (MoU), ICEYE will provide multi-angle SAR imaging and analysis of iron ore stockpiles and RS Metrics will provide commodities traders and industry analysts with information on supply chain disruptions, regional & global trends, and inventory information.

The synthetic aperture radar market research report includes in-depth coverage of the industry with estimates & forecast in terms of revenue in USD from 2015 to 2026 for the following segments:

The market size of synthetic aperture radar exceeded USD 4 billion in 2019.
The industry share of synthetic aperture radar is estimated to grow at a CAGR of over 10% between 2020 and 2026.
The APAC market growth will be driven by increasing investments in the region by major industry players to provide synthetic aperture radar systems with the ability to project images through clouds and poor weather conditions.
The aircraft application segment accounted for majority market share of over 60% in 2019 owing to wide scope of application of SAR technologies in commercial & defense aircraft curtaining to C4ISR applications.
Major industry players include Lockheed Martin, Airbus, L3Harris, Northrop Grumman, Raytheon, Thales Group, BAE Systems, Saab, Leonardo S.p.A, and Cobham Plc.