Geothermal Energy Market size surpassed 15 GW in 2020 and is anticipated to register over 1.7% CAGR between 2021 and 2027. Increasing electricity demand from the off grid remote locations coupled with rising investments and research & development activities toward advanced technologies will create substantial market opportunities for various industry players present across the globe. 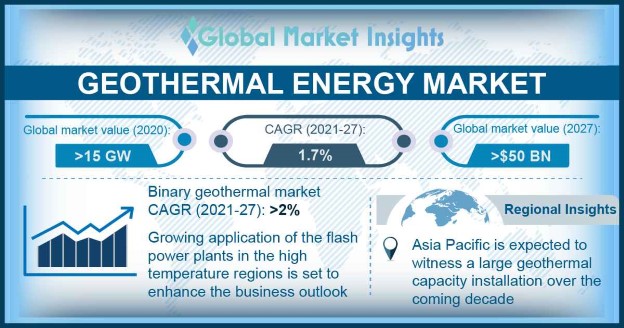 Geothermal is a reliable and constant source of energy that can be extracted without burning any external fuel. The energy can be harnessed from underground sources including shallow subsurface, hot rocks, and reservoirs of hot dry steam and wet steam. The geothermal applications are highly influenced by the factors including steam and water temperature, accessibility & reservoir porosity, and permeability. Depending on its characteristics, the energy can be used for cooling and district heating purposes or for electricity generation.

The energy is though available all over the earth, there is a very limited percentage of the energy which can be harnessed for power generation and heating applications due to a small percentage of explorable land with suitable pockets of steam and water. Introduction of a variety of policies targeted at clean fuel adoption coupled with rising investments toward advanced technology production will further stimulate the business scenario. In addition, strict implementation of policies to limit the amount of GHG emissions and particulate matter will accelerate the geothermal energy market share in the forecasted timeline.

The global economy has been hit hard with the outbreak of COVID-19, also known as the novel corona virus. According to the World Health Organization (WHO), the virus has affected more than 200 countries with adverse impact on the economies leading to lockdown, thereby limiting the business growth. The shifting focus on renewables to reach the climate targets will positively influence the industry landscape.

Binary geothermal energy power plants are anticipated to grow at over 2% during the forecast timeline. The plants utilizing the technology ensure zero emissions, low initial cost, and high efficiency along with its ability to easily integrate with other energy sources comprising solar and biomass. For instance, the development of the first geothermal power plant in Slovakia will utilize the binary cycle technology for power generation. Wide applicability across low- and medium-temperature geothermal fields along with improved thermal efficiency and environmental benefits will foster the geothermal energy market outlook.

The dry steam geothermal power plants were the first type to be incorporated. They utilize superheated steam at pressures above atmospheric that can be directly fed into the turbines for power production. The direct noncondensing type is the simplest & cheapest way to produce power from geothermal. However, the large investments, more expensive maintenance, complex performance along with the need to cool off the geothermal steam make it a less favorable technology.

Growing application of the flash power plants in the high temperature regions is set to enhance the business outlook. They are the simplest and most conservative power plant designs that are easy to build and operate.  The flash cycle geothermal technology is classified into single, dual, and triple power plants based on the number of flash containers or separators used in the technology setup. The double flash plants are preferred over single flash on account of its ability to enhance the power output by 19.97%. Growing installation of single & double flash units will positively impact the geothermal energy market statistics. 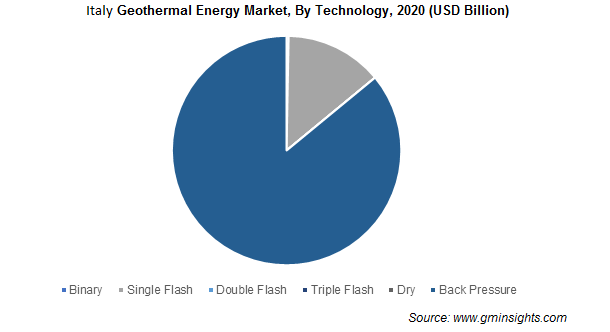 Development of funding organizations including Australian Renewable Energy Agency (ARENA) and Clean Energy Finance Corporation will drive innovation in the geothermal energy industry. Lowering regulatory barriers in certain areas coupled with synchronizing various air pollution standards will enable trade across the countries, thereby boosting the overall business outlook. Announcement of subsidies on utilization of renewable energy in countries including Japan will influence the adoption of geothermal energy, thereby fueling it as a major energy source. Additionally, development of funding mechanisms will further encourage the use of geothermal energy, thereby creating business opportunities to expand the industry landscape. 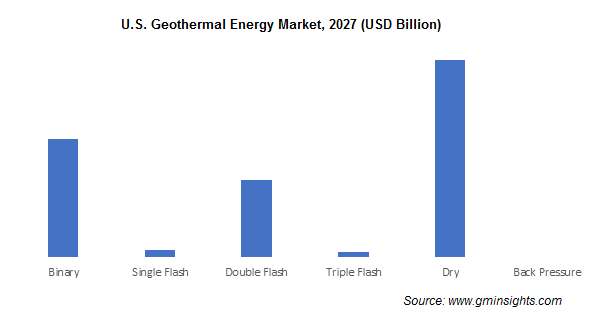 The Latin America geothermal energy market statistics is set to witness substantial growth owing to increasing number of geothermal projects in Costa Rica and Guatemala. Abundance of renewable resources, growing focus on utilizing geothermal reserves and increasing demand for electricity in the economy is set to drive the market share. For instance, Grupo ICE announced rising focus on geothermal than other reserves to match up with the increasing electricity demand. This in turn will reduce the pressure on electricity rates in the country. Furthermore, formation of development groups with the Inter-American Development Bank (IDB) will focus on the promotion & development of geothermal energy in the region.

The eminent industry players operating in the geothermal energy market include Ormat technologies, TerraGen, Mitsubishi Power, Reykjavik Geothermal, Exergy International, Turboden, Enel Green Power, Calpine, and Halliburton among others. There are various manufacturers located globally which are focused at developing new technologies and are further involved in business expansion initiatives to accelerate the market growth. For instance, in October 2020, Mitsubishi Power completed the renovation of the Otake geothermal power plant in Japan. Additionally, Climeon, a Swedish company commissioned a new geothermal heat power plant at Okuhida Onsengo Kansaka in June 2020.

Geothermal Energy market research report includes in-depth coverage of the industry with estimates & forecast in terms of “USD” from 2017 to 2027, for the following segments: