Genetic Testing Market size exceeded USD 14.8 billion in 2020 and is expected to grow at 11.6% CAGR from 2021 to 2027. Genetic testing has been available for several years. Lately, the potential for accurate diagnostic testing has prolonged, with the introduction of next-generation sequencing technologies. Genetic testing is tedious and requires the experience of genetic counsellors and medical geneticists to assist in selecting the most suitable test for a patient. Similarly, advances and improvements in genetic testing technology are having a major impact on the market growth as these tests accurately diagnose different diseases. In addition, the COVID-19 outbreak will have a neutral impact on the market, owing to decline in test procedures as a result of lockdown in almost all parts of the world. 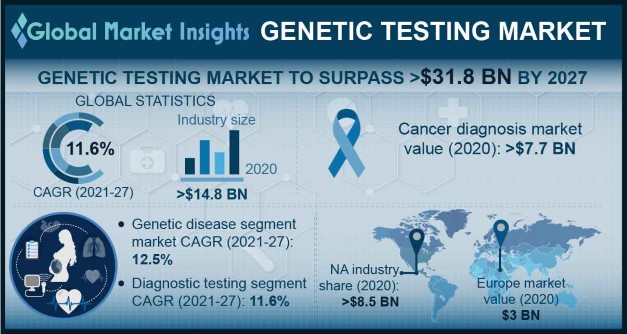 Genetic testing also called as DNA testing is a kind of medical test that detect changes in proteins, genes or chromosomes. The test results are able to confirm or rule out a speculated underlying genetic condition or aid in determining an individual’s chance of developing or passing on a genetic disorder.

Introduction of novel technologies as well as techniques for genetic testing with increased accuracy and efficiency will serve to be a high impact rendering factor for the market expansion. The availability of efficient and highly sensitive methods of DNA sequencing for prenatal genetic testing further offer new approaches for initial screening test during new pregnancies. These methods allow detection of small amounts of fetal DNA that circulates naturally in the mother's blood during pregnancy, thus surging the industry growth. Moreover, development of NGS, a rapidly evolving technology that enables sequencing of a whole genome or part of a genome and rapid extraction of genetic information from biological materials will fuel the adoption of genetic tests in near future. However, high cost of genetic tests may hinder the overall market value.

Increasing demand for diagnostic testing will spur the market revenue

The diagnostic testing segment in the genetic testing market is estimated to witness around 11.6% growth rate through 2027 led by rising incidence of genetic and other chronic disorders. According to the data published on WHO, rising prevalence of inherited diseases including sickle cell anaemia, cystic fibrosis and haemophilia will accelerate the overall market size for genetic tests. Additionally, early disease diagnosis further allows patients to undergo therapeutic treatment at an early stage that minimizes the severity of disease leading to reduced mortality rate and hence proving beneficial for the segment expansion. 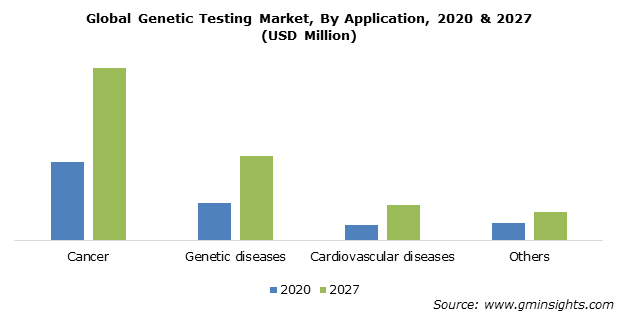 The cancer segment in the genetic testing market was at valued USD 7.7 billion in 2020 driven by surging prevalence of cancer across the globe. Genetic testing helps to estimate the chances of developing cancer throughout an individual’s lifetime by examining for specific changes in proteins, chromosomes and genes. Cancer, globally, is the 2nd leading cause of death, and nearly 70% of deaths from cancer occur in low- and middle-income countries that raises the demand for genetic testing. As, significant enhancements can be made in the lives of cancer persons by diagnosing at an initial stage and avoiding postponements in care resulting in reduced morbidity, less expensive treatment and greater probability of surviving.

The genetic testing market research report includes an in-depth coverage of the industry with estimates & forecast in terms of revenue in USD from 2016 to 2027, for the following segments:

The genetic testing industry size was pegged at USD 14.8 billion in 2020 and is anticipated to witness around 11.6% CAGR over the forecast period 2021-2027.
The market share from diagnostic testing is projected to register 11.6% CAGR up to 2027 with increased prevalence of genetic and chronic diseases.
The industry share from cancer segment had reached USD 7.7 billion during 2020 and will expand due to the need to early diagnosis and avoiding postponement of required care.
North America genetic testing market size had surpassed USD 8.5 billion in 2020 and is expanding with a consistent rise in cancer prevalence and chronic disorders.