Electrophysiology market size valued at more than USD 5 billion in 2019 and is expected to grow at a CAGR of over 10.2% between 2020 and 2026. Technological developments in electrophysiology devices will considerably drive the market growth in the forthcoming years. Advancements leading to miniaturized monitoring systems and ablation devices will stimulate the industry expansion. 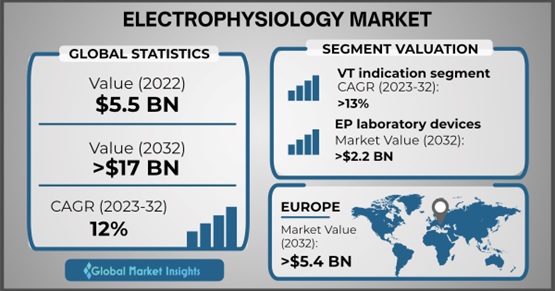 Electrophysiology is used to assess electrical system of heart to check its abnormal rhythms. Atrial flutter indicates a fast atrial rate and is one of the most prevalent heart rhythm disturbances. Electrophysiology market will grow with rising deployment across ambulatory surgical centers.

Growing prevalence of cardiac arrhythmias and high risk of heart failure will impel the demand for electrophysiology procedures. Rising procedural volume in healthcare facilities positively influences the product acceptance. Moreover, adoption of unhealthy habits such as alcohol consumption and smoking further boosts the disease prevalence and will offer significant demand for electrophysiology procedures and devices during the forecast period.

Along with product innovations, growing geriatric population contributing to the global disease burden will also fuel the product demand during the forecast timeline. According to the European Society of Cardiology, the proportion of elderly population with age over 80 years suffering through atrial fibrillation is anticipated to rise from 51% to 65% between 2016 and 2060. These patients are at greater risk of heart stroke and reports majority of hospitalizations. As per the World Health Organization, the global population aged 60 years and older is projected to reach 2 billion by 2050 with doubled proportion rate from 12% in 2015 to 22% by 2050. Therefore, to cater increasing patient population, firms are focusing on new product launches and expansion in the field that will benefit the overall in industry demand. 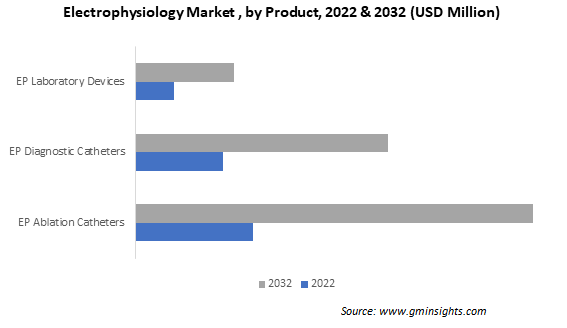 Electrophysiology ablation catheters held over 45% of the electrophysiology market share in 2019 led by its advantage in reduction and elimination of atrial fibrillation symptoms such as weakness, fatigue and shortening of breath.

Atrial fibrillation segment exceeded more than USD 2.2 billion in 2019. According to the CDC, about 12.1 million people are poised to have atrial fibrillation by 2030 in the U.S. Ablation procedures are highly adopted for treatment of various kinds of atrial fibrillation. Thus, with increasing awareness trend among population and disease incidence, the segment will witness momentous growth.

Integration of diagnostic equipment in electrophysiology labs, catering to growing demand for ablation

Catheterization laboratories/EP laboratories segment in the electrophysiology market is predicted to witness around 11.2% growth rate till 2026 impelled by usage of advanced mapping products and increasing catheterization procedures. Rising procedure volume performed by specialist surgeons in these facilities including minimally invasive procedures will further contribute to the market revenue. Furthermore, evolving infrastructure in developing regions leading to expansion of catheterization laboratories with expanding treatment needs due to high disease burden will augment the segment expansion.

North America electrophysiology market size was USD 1.5 billion in 2019 on account of substantial population suffering from arrhythmias and presence of leading players focusing on product innovation. According to the CDC, in the U.S., atrial fibrillation was the underlying cause of about 25,845 deaths in 2018. Unhealthy food habits along with consumption of tobacco and alcohol adds to diseased population pool in existing burden. In addition, sophisticated healthcare infrastructure propels procedure volume, thereby driving the market value in the coming years.

Some of the leading companies operating in the market include Abbott Laboratories, Boston Scientific Corporation, GE Healthcare, Medtronic Plc., and Johnson & Johnson among other players. These industry leaders are adopting various inorganic growth strategies to obtain competitive advantage and strengthen their market position.

The electrophysiology market research report includes an in-depth coverage of the industry with estimates & forecast in terms of revenue in USD from 2015 to 2026 for the following segments:

The global market for electrophysiology products was more than USD 5 billion in 2019 and is projected to reach around 10.2% CAGR up to 2026 with developments in miniaturized monitoring systems.
More than 45% of the industry share was held by electrophysiology ablation catheters in 2019 owing to the use in reduction as well as elimination of atrial fibrillation symptoms.
Market share from the atrial fibrillation indication segment was over USD 2.2 billion in 2019 due to the rising awareness among people regarding the occurrence of the disorder.
North America electrophysiology market size was around USD 1.9 billion in 2019 and will expand with a large number of people in the U.S. suffering from arrhythmias and other disorders.