Radar Sensors Market size is set to surpass USD 25 billion by 2027, according to a new research report by Global Market Insights, Inc.

Rising penetration of unmanned aircraft systems (UAS) and drones across developed economies is projected to drive the market growth during the forecast timeframe. According to February 2021 press release by Federal Aviation Administration (FAA), the number of registered unmanned aerial vehicles (UAVs) present in the U.S. accounted for 1.1 million units in February 2021, of which commercial UAVs accounted for 380,557 units and recreational UAVs accounted for 491,237 units. These UAVs are highly integrated with radar sensors for various applications such as obtaining precise navigation, object detection, surveillance, and security. Several industries, including e-commerce and construction, and logistics sectors are extensively incorporating commercial drones for delivery, surveying, mapping, and inspection applications, which will further increase the adoption of radar sensors in the market over the forecast timeline. 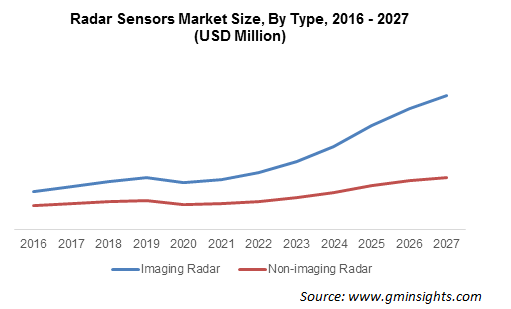 The non-imaging radar segment accounted for 35% of the radar sensors market share in 2020 and is anticipated to witness 11.5% growth rate till 2027 owing to the rising integration of non-imaging radar into robotics and automation equipment across manufacturing and process industries. The non-imaging radar offers several high-end features, such as efficient measurement of the velocity, speed, and Plan Position Indicator (PPI), compared to continuous wave (CW) and pulse wave radar. These features increase its acceptance in industrial and collaborative robots, automated assembly lines, and automated guided vehicles (AGVs).

The automotive application segment held 33.5% of the market share in 2020 and is estimated to attain a CAGR of 21.5% during 2021 to 2027. Radar sensors deliver a 360 degree of the surrounding, thereby accelerating their demand in ADAS and autonomous systems. Several automotive OEMs including Daimler AG, BMW, Tesla Inc., Waymo LLC, and AB Volvo are extensively focusing on achieving level-V autonomy in their upcoming vehicles to stay competitive in the market. The fully autonomous vehicles require integration of up to 10 radars to enhance the safety and comfort. Adding to this, stringent government regulations mandating ADAS across geographies to reduce road fatalities will fuel the industry growth.

North America radar sensors market accounted for 26.5% of revenue share in 2020 and is poised to expand at 16.5% till 2027 driven by rising government spending by the U.S. federal government on the military & defense industry. In February 2020, the U.S. President and the Congress proposed a FY2021 budget requesting USD 740.5 billion on national security, of which USD 704.5 billion will be for the Department of Defense (DoD). This will increase the research & development in military electronics, growing the demand for radar sensors in the region.