Wearable Artificial Kidney Market size is projected to experience substantial progress from 2020 to 2026. The wearable artificial kidney is a portable device designed to allow patients to experience the benefits of daily dialysis while doing their normal daily activities. The device is designed to be worn on the patients body in order to provide the continuous renal replacement. Hence, owing to these benefits the market is anticipated to witness a significant growth in the upcoming years. 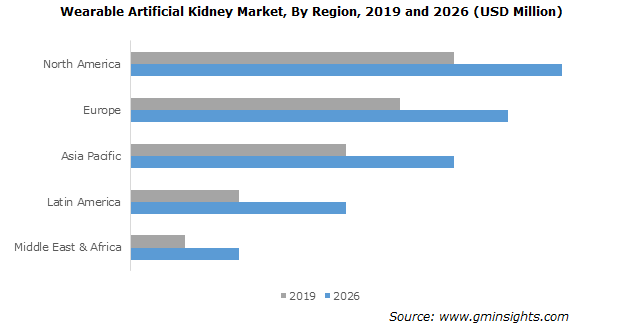 Growing number of patients suffering from renal failure coupled with ongoing technological advancements in artificial kidneys are some of the factors that are boosting the market growth. For instance, in 2014, the U.S. Food and Drug Administration, announced the first human clinical trial for the wearable artificial kidney manufactured by Blood Purification Technologies. This innovation was aimed to obtain effective and satisfactory results from patients. Hence, owing to the above-mentioned factors the market is expected to witness a substantial growth in the forecast period.

Rising incidence of chronic kidney disease is further contributing into the market growth positively. Diabetes and high blood pressure are the major cause of kidney failure. According to the Centers for Disease Control and Prevention, in 2019, around 37 million people were estimated to suffer from chronic kidney disease. Increasing awareness pertaining to the unhealthy lifestyle, renal failure diseases, and increasing health issues are other factors driving the wearable artificial kidney market growth.

On the basis of dialysis type, the wearable artificial kidney market is segmented into hemodialysis and peritoneal dialysis. Hemodialysis is anticipated to hold a majority market share in the upcoming years. This is owing to the growing preference of the device among patients undergoing hemodialysis. Rising prevalence of hemodialysis across the globe is further propelling the market growth. According to the Fresenius Medical Care, presently, around 3.4 million patients across the globe are undergoing dialysis treatment. In addition, according to the University of California San Francisco, in 2016, hemodialysis care, cost the Medicare system an average of USD 90,000 per patient annually in the U.S. Hence, owing to these above-mentioned factors the market is expected to witness a significant market share in the projected timeframe.

On the basis of end-use, the market is segmented into hospitals, ambulatory surgical centers, dialysis centers and others. Hospitals is expected to witness a significant growth in the upcoming years. The high market share is attributed to the several reasons including growing healthcare expenditures and lucrative reimbursement policies. Furthermore, growing number of people visiting hospitals due to the availability of device at minimal cost is also contributing to the market growth.

U.S. wearable artificial kidney market is estimated to hold a majority market share in the coming years owing to the growing prevalence of end stage kidney disease. Growing awareness campaigns pertaining to chronic kidney disease will further technologically enhanced market growth. According to the Centers for Disease Control and Prevention, in 2016, in the U.S. adults aged 18 years or above, diagnosed with diabetes and high blood pressure were the main people reported for end stage kidney disease. Hence, all the above-mentioned factors are impelling the market demand in the country.

Some of the major players involved in the global wearable artificial kidney market share are Blood Purification Technologies Inc., AWAK Technologies Pte. Ltd., International Renal Research Institute of Vicenza/IRRIV, San Bortolo Hospital, Nanodialysis BV and Triomed AB. The key players are emphasizing on major industry strategies such as mergers & acquisitions and are taking a few initiatives to maintain a competitive edge in the market. For instance, in 2014, Food and Drug Administration granted clearance to Blood Purification Technologies to begin human clinical trials of its Wearable Artificial Kidney.