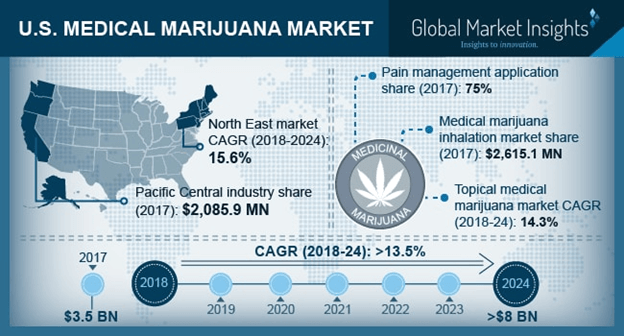 Growing prevalence of pain in the America is driving the U.S. medical marijuana market. As per the National Health Interview Survey (NHIS), approximately 25 million people suffer from pain each day in the U.S. Furthermore, increased research on marijuana's potential for medicinal use is also gaining momentum in the U.S., thereby enhancing the market growth during the forecast period.

The U.S. medical marijuana pain management market held around 75% share of total application market valuation, accounting for a total value of USD 2,691.9 million 2017. Growth is attributed to the increased prevalence of pain-related issues and conditions. According to various research studies in the U.S., 1 in 10 adults suffer from chronic pain each year, which in turn has augmented the application of medical marijuana.

The U.S. medical marijuana market for skin-related conditions such as eczema and psoriasis, is forecasted to grow at a very impressive rate of 13.7%. Marijuana has anti-itch, anti-microbial and anti-inflammatory properties, that accelerates the treatment of skin disorders. In addition, marijuana is a better treatment option as compared to other steroid creams which has few side effects including rosacea, thinning of skin, increased blood pressure and blood sugar levels.

The U.S. medical marijuana inhalation market segment accounted for USD 2,615.1.0 million 2017. Inhalation route of administration enables controlled dosage and effective absorption of cannabinoids into the body, hence increasing its preference as compared to other options. Vaping of medical marijuana results in maximum absorption of the product into the body, hence maximizing the therapeutic effects.

Topical medical marijuana market is estimated to grow at a CAGR of 14.3% during the forecast period in the U.S. Increased demand for marijuana topical products for the treatment of various skin diseases including eczema and psoriasis will result in the market growth. According to researchers at the University of Colorado, cannabinoid is beneficial for the treatment of skin conditions and can successfully be used as a natural alternative to commonly-used steroids, thus driving the market growth.

North East medical marijuana market is estimated to expand at 15.6% CAGR during the forecast period. Number of states from the North East zone of U.S. have been legalizing the therapeutic application of marijuana. It is expected that with each passing year, majority of the states in North East zone will pass medical marijuana laws, facilitating the application of marijuana for the treatment of various chronic conditions. Hence, North East region of the U.S. is expected to grow tremendously, thereby resulting in industry expansion.