Commercial Drone Market size exceeded 160 thousand units with an industry value of over USD 2 billion in 2016 and is predicted to register 25% growth from 2017 to 2024. 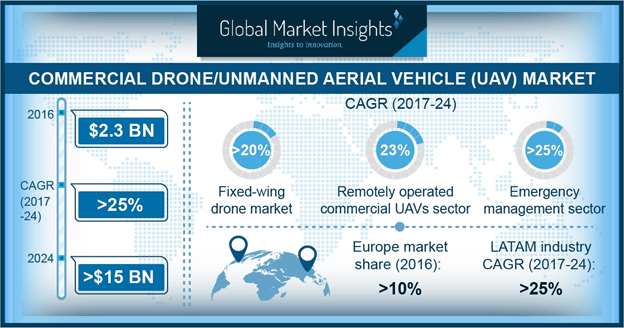 The commercial drone/UAV market growth is owing to rising adoption of drone technology in industrial verticals including agriculture, mining, and construction. For instance, in the agricultural sector, drones are widely used for monitoring farmlands to enable farmers to respond quickly to threats such as drought and pests. Precision technology is gaining popularity in the sector to provide more meaningful insights to farmers and agricultural practitioners so that they can accurately plan and manage their farm operations. Another factor spurring drone technology is the support from government agencies globally. For instance, in October 2017, the U.S. government launched a program to increase the testing of commercial drones to include flights flown over people, nighttime operations, and flights beyond the VLOS.

The fixed-wing commercial drone market is expected to grow at a CAGR of over 20% from 2017 to 2024 due to its simple structure. The simple structure of fixed-wing aircraft supports less maintenance and repair process, thus providing users with more operational time at lower costs. Also, as these aircraft can carry high payloads for long distances, their demand will increase over the forecast timeline. Companies present in the market are involved in new product developments to cater to the needs of industrial customers. For instance, Atlas Dynamics launched a fixed-wing UAV, the Atlas Blue-J, which is suitable for security & inspection missions.

By Mode of Operation 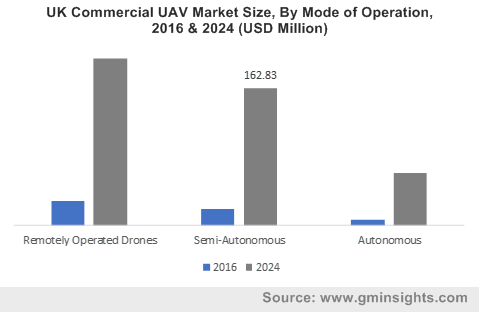 The remotely operated commercial UAVs market is projected to grow at a CAGR of around 23% over the forecast timeline. Remotely-operated drone is operated using a remote and comprises a receiver for receiving instruction signals via a remote control operated by an operator to send transmission signals to the drone. This ensures that the drone is completely under the vision of the operator. This supports the adoption of remotely operated drones in sectors, particularly government and defense.

The emergency management application segment in commercial UAV market is estimated to exhibit a growth rate of over 25% due to the heavy adoption of drones for disaster management applications. Commercial drones prove to be very beneficial in various phases of disaster management as they help search & recuse teams to identify areas affected by disasters and aid disaster response. Drones also help emergency managers to evaluate a critical situation and prevent them from entering a hazardous zone. As drones are still a new innovation in humanitarian response operations, the demand for such drones will increase over the forecast timeline to improve the effectiveness of disaster operations and help survivors of disasters faster. 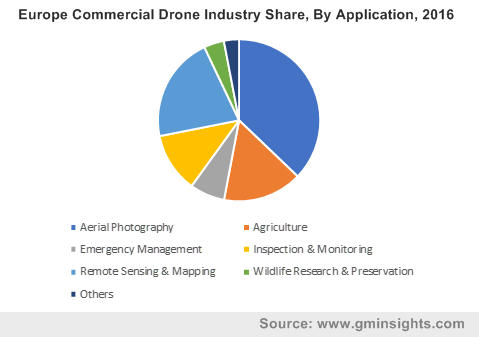 The Europe commercial drone market is projected to hold a market share of over 10% by 2024 due to favorable government initiatives to promote the usage of drones for various industrial applications including energy, maritime surveillance, and defense. For instance, the UK government with the authorization of the Civil Aviation Authority (CAA) in 2016 relaxed some of its rules & regulations concerned with applications of the UK drones for commercial trials after requests from Amazon to test its Prime Air delivery services. The presence of several drone manufacturers in countries including the UK, Germany, and France will also augment the market growth in the region.

The commercial drone market is expected to witness huge competition as it is dominated by several leading drone manufacturers and emerging startups vigorously involved in new product developments to cater to the needs of customers. For instance, in January 2018, Yuneec International launched two new products, fixed-wing Firebird FPV and HD Racer for a more immersive flight. This new product development allowed the company to offer industry-leading technologies and pilot-centric features in the electric aviation industry. In June 2017, a renowned Japanese investor, Kotaro Chiba partnered with Kamakura Investment Management offered about USD 9 million (1 billion Yen) DroneFund. The fund was used to help drone startups with finance and support the Chiba Do community. The technologies represented in these include drone racing, aerial imaging, and drone patent filing.

The drone market witnessed a major shift, moving from hobbyists and commercial photographers to those using drones for industrial applications. Drone technology is evolving as huge investments are made by companies for the development of the drone industry. Enterprises across industries have realized the new applications of drone technology that go beyond the traditional use such as photography or videos and surveillance. Supportive government regulations and policies have also resulted in the uptake of commercial drones, augmenting market growth.

The market size of commercial drone was valued over USD 2 billion in 2016.
The industry share of commercial drone is projected to expand at 25% CAGR during 2017 to 2024.
Europe is projected to hold a market share of over 10% by 2024 owing to favorable government outlook towards the use of drones in defense, energy, maritime surveillance, and other applications.
Commercial UAVs can help identify disaster-affected areas, provide fast disaster response, support search and rescue teams and enable disaster managers to assess critical situations.
Some of the companies operating in the market are DroneDeploy, Bae Systems, DJI, AeroVironment, PrecisionHawk, Parrot, Airobotics, Airware, Cyberhawk Innovations Ltd., Amazon Prime Air, 3D Robotics, Ehang Inc., Hoverfly Technologies, Intel Corporation, Yuneec International, and senseFly.
Remotely-operated drones can be operated from a distance while providing the user complete supervision over the equipment, driving their adoption for defense and government purposes.