Surgical Equipment Market size is projected to experience significant growth from 2020 to 2026. Surgical equipment includes hand-held tools or instruments that are used by healthcare physicians during surgical procedures. Some of the surgical instruments include forceps, graspers, dilators, retractors, scalpels and scissors along with other equipment. These are used by surgeons while performing surgeries such as cardiovascular, orthopedic and neurosurgeries among others. Due to increasing number of surgeries in hospitals, clinics and ambulatory surgical centers, the market will witness lucrative growth opportunities during forecast period. 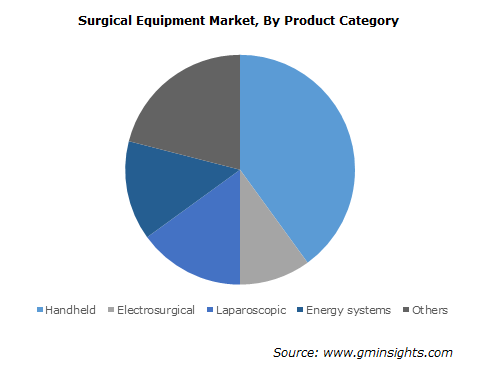 Growing geriatric population will boost surgical equipment market growth in the upcoming period. According to the United Nations, globally, there were about 703 million population aged 65 years and above in 2019. Rising prevalence of chronic conditions such as cancer, arthritis and cardiovascular diseases among this population has resulted in increasing number of surgeries. As per the American Association of Retired Persons, more than 40 percent of inpatient and about 33 percent outpatient surgeries are performed among older population. Thus, growing geriatric population coupled with rising number of chronic diseases will accelerate the market growth during forecast timeframe.

Due to the increasing incidence of trauma and physical injuries surgical equipment market is estimated to proceed at significant rate in the upcoming years. According to the Standford Children’s Health, in the U.S., about 3.5 million children aged 14 years and above get affected by physical injury during sports and more than 775,000 are treated in the hospital each year. Thus, increasing occurrence of physical injuries along with accidents will impel the market growth in future.

Furthermore, handheld surgical equipment include retractors, dilators, graspers, dissecting instruments, forceps and spatulas, closure equipment and others. Handheld surgical equipment market will foresee significant growth in the upcoming period as these are used widely in most of the surgical procedures. Owing to increasing adoption and benefits offered by these instruments, the industry will foresee momentous growth in the forecast period.

On the basis of applications, surgical equipment market is classified as cardiovascular surgery, neurosurgery, orthopedic surgery, urology, general surgery and others. Orthopedic surgery market will witness robust market growth during forecast period due to increasing incidence of orthopedic disorders worldwide. Arthritis and osteoporosis are common conditions among women. With the ageing population, burden of the musculoskeletal diseases is also increasing. Thus, increasing musculoskeletal disorders coupled with aging population will boost the segment growth.

Minimally invasive surgical equipment market is projected to witness lucrative growth during forecast period due to its advantages over open surgery. Minimally invasive surgeries avoid large incisions that allows fast recovery with minimal pain. Recent development in minimally invasive technology and growing inclination towards such surgeries, the segment will foresee momentous growth in the upcoming years.

On the basis of end-use, surgical equipment market is classified as hospitals, ambulatory surgical centers and clinics. Ambulatory surgical centers segment will grow at significant rate owing to developing infrastructure, increasing preference for procedures in these facilities and associated advantages. Furthermore, presence of experienced surgeons and expanding number of ambulatory centers will spur the segmental growth in the upcoming period.

China surgical equipment market size is projected to expand momentous pace due to increasing number of chronic and infectious diseases across the country. Growing investment in the healthcare sector, adoption of advanced technologies and improving standard of care will be the key factors influencing the market growth. Additionally, increasing number of skilled workforce, growing number of healthcare centers and rising disposable income of the population will further contribute to significant market growth in the upcoming years.