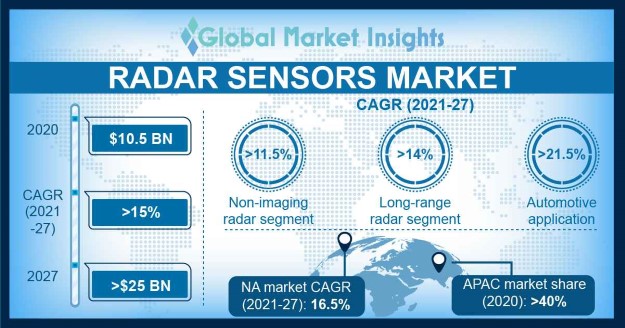 Increasing demand for IoT and smart devices in developing nations will drive the radar sensor market growth. These sensors deliver improved performance in various temperatures and lighting conditions with compact features, accelerating the demand in automation and security applications of smart home devices. According to the National Cybersecurity Center of Excellence, in 2019, there were 6.4 billion connected devices projected and had raised to approximately 20 billion in 2020. To cater to the high demand in the industry, market players are continuously innovating new radar sensing technology, catering to the high competitiveness among other leaders.

The COVID-19 outbreak has severely affected the radar sensor market expansion with the declining demand from automotive and aerospace sectors. The market participants from the automotive sector have postponed their research and development initiatives in the automotive sector with the lack of workforce and disruption in the supply chain. This will hamper the market demand for radar sensing devices in various automotive applications. The pandemic has resulted in economic slowdown of several nations around the globe. The government organizations are also planning to reduce their defense budgets to focus on the medical & healthcare industry.

The imaging radar dominated around 65% of the radar sensor market share in 2020 and is anticipated to witness 17% growth rate till 2027, led by its rising adoption in the automotive sector for ADAS and autonomous applications. These sensors use echolocations and the time of flight principle to improve detection capabilities and performance of automotive safety systems.

Companies are continuously involved in the innovation of imaging radar such as the development of 4D imaging radar to accelerate acceptance in advanced automotive safety systems. The 4D imaging radar accelerates the sensing capabilities to up to 300 meters, which will foster the market opportunities for autonomous driving applications. 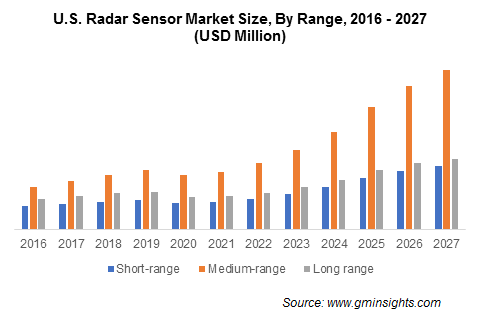 Medium-range segment in the radar sensor market held more than 47.5% of revenue share in 2020 and will grow at a CAGR of around 17% through 2027. A medium-range radar sensor operates at a frequency band of 76 to 77 GHz, which is considered a standard for automotive radar applications in several nations around the globe. The medium-range radar can detect an object up to 160 meters away, impelling the market opportunities for predictive emergency braking systems and adaptive cruise control systems, among others.

Rising initiatives by government authorities to mandate the integration of safety systems in vehicles to avoid accidents will boost the radar sensor market value. Vehicle manufacturers are also incorporating these systems in high commercial vehicles to motor vehicles, enhancing road safety around the globe. In July 2020, BMW Motorrad announced that it will introduce radar-guided adaptive cruise control systems for motorcycles. Furthermore, according to the National Highway Traffic Safety Administration (NHTSA) approximately 99% of the vehicle manufacturers in the U.S. have planned to integrate automated emergency systems as the standard feature in their coming vehicles by 2022. 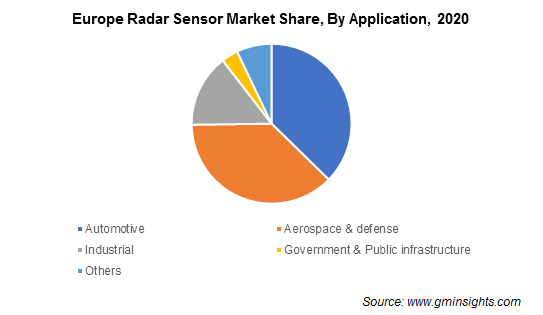 The increasing usage of surveillance systems in military units and growing security concerns across the globe will influence the radar sensor growth opportunity. Governments from several nations are inclined toward enhancing their military power by integrating new security and monitoring systems. These factors will augment the market opportunity for radar sensors in the aerospace & defense sector. In January 2021, the Slovak Government has announced to procure 17 radar systems from Israel Aerospace Industries (IAI) to fuel its military capabilities. The integration of new systems will aid the air defense units to track, intercept, and monitor airborne targets from an altitude of 100 to 3,000 meters. 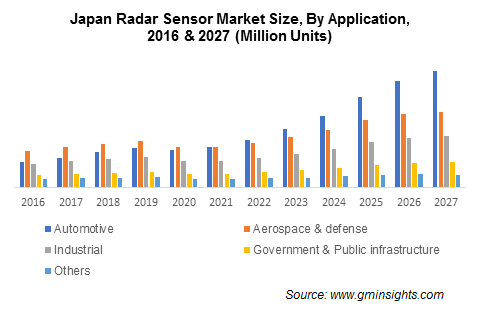 Asia Pacific radar sensor market accounted for over 40% of revenue share in 2020 owing to the rising adoption of industrial automation and robots in the manufacturing sector of China, Japan, and South Korea, among others. Several initiatives by the Government of Japan, such as Robot Revolution & Industrial IoT Initiative and Society 5.0, will drive industrial automation in the region. The Industrial Value Chain Initiative (IVI) by Japan will further accelerate the acceptance of industrial robots in the regional manufacturing sector. This will boost the market potential for radar sensor manufacturers.

To support such initiatives, companies are deploying industrial robots in the field of manufacturing, process, automotive, logistics & other sectors, thus supporting the industry. According to the International Federation of Robotics, in 2019, the industrial robot sales in Japan had increased by 12%, i.e., by 355,000 units. Moreover, Japan has the presence of prominent industrial robot manufacturers, capturing 52% of the global supply in 2018.

New collaboration and partnership strategies to stay competitive in the market

The radar sensor market research report includes in-depth coverage of the industry with estimates & forecast in terms of revenue & shipments from 2016 to 2027 for the following segments:

Radar sensor industry size was valued at USD 10.5 billion in 2020 and will record a 16% CAGR through 2027, surpassing about 370 million unit in global shipments.
Imaging radar sensors accounted for over 65% market share in 2020 and their demand will grow at a 17% CAGR up to 2027 driven by increasing application in ADAS and other autonomous vehicle applications.
Aerospace & defense applications will capture around 35% of the industry share by 2027 with growing application of radar sensors in monitoring helicopters, UAM aircrafts, and other types of military transport.
Asia Pacific held around 40% market share during 2020 and witness notable growth led by increasing adoption of industrial automation and robots in the manufacturing sector.