Mammography Systems Market size surpassed USD 2 billion in 2018 and is expected to achieve over 7.9% CAGR up to 2025. 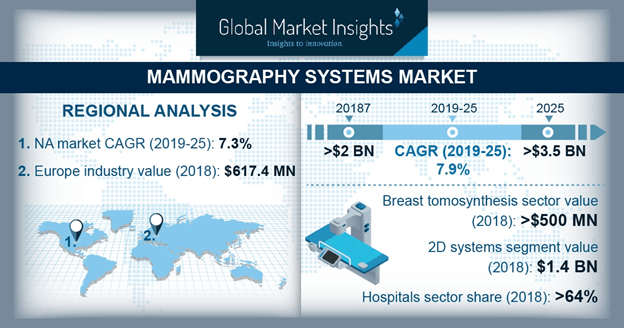 Mammography systems are an advanced medical equipment used for early detection and diagnosis of breast cancer. It is a low dose X-ray technique designed to image the underneath breast tissues. Mammography is mainly used for patients with symptoms of breast cancer who have no signs of breast cancer. The aim of mammography is early detection of breast cancer, through screening of microcalcifications and characteristic mass/lumps. It is a non-invasive technique that involves exposure of breasts to low dose of ionizing radiations to produce the inside image of the body. According to Breast Cancer research Foundation, breast cancer is the leading cause of mortality among women in developing countries. It is the most frequent cancer detected among women across about 140 countries.

The history of mammography systems industry can be dated back to 1913, when A. Salomon, a surgeon from Berlin conducted a study on 3,000 mastectomies for the study of mammography. Till 1960, only few developments were seen in this technique, until R. Leborgne, Ch. Gros and several other European and American radiologists contributed in this work. Ch. Gros was acknowledged for his notable work globally for the diagnosis of breast diseases. In 1960, mammography using X-ray tubes and without compression was performed by the radiologists. With the adoption of advanced technology, screen film mammography was introduced with faster imaging and low radiation dose. Between 1980-1990, substantial improvements in screen film technology was witnessed and dedicated mammography units were established. As breast cancer was categorized as public health threat, Mammography Quality Standards Act of 1992 was imposed to maintain the screening quality. Currently, leading players such as Fujifilm, Hologic, Siemens Healthineers and GE Healthcare are developing mammography systems to enhance cancer detection rate with reduced exposure to radiation. With the launch of first digital breast tomosynthesis system in the U.S. market by Hologic in the year 2011, a new breakthrough was established in mammography systems industry, that was followed by consequent launch by other market players including GE Healthcare, Siemens Healthineers and Fujifilm. Thus, with growing patient pool of breast cancer coupled with continuous technological advancements, the global mammography equipment industry will spur over the foreseeable future.

The market size for mammography systems will witness numerous growth opportunity due to growing understanding about screening modalities for diagnosis of breast disorders. Government has played a vital role in spreading awareness regarding early detection of the breast cancer and availability of advanced mammography equipments in the market. For instance, Breast Health Global initiative was formed to develop financially favourable and culturally suitable guidelines for underdeveloped countries to improve breast health results. However, rising incidence of breast cancer and high rate of mortality among women worldwide will augment the demand of mammography systems driving the market growth. However, high cost associated with advanced mammography systems and false-positive and negative outcomes may hamper the market growth to certain extent.

Based on product type, the market statistics for mammography systems is categorized into analog systems, full field digital mammography systems and breast tomosynthesis systems. Breast tomosynthesis segment was valued at over USD 500 million in 2018 and will foresee robust growth. Breast tomosynthesis is state-of-the-art technology, that produces superlative quality of images, thereby lowering the concealing effect of overlapping tissues. This feature escalates the detection of malignant breast cancer, that further decreases mortality rates caused due to end-stage detection of invasive breast cancer. Thus, due to greater precision and reduced recall rates, breast tomosynthesis will mark significant impact on the overall industry growth in the future years.

Based on end-use, mammography systems market is bifurcated into hospitals, ambulatory surgical centers and others. Hospitals segment accounted for more than 64% market share in 2018. Availability of advanced screening systems, highly skilled doctors and capacity for investment in high-cost imaging modalities will further augment the current market share. Furthermore, presence of mammogram screening programs and mobile mammography screening will further aid the segmental size over the forthcoming years. 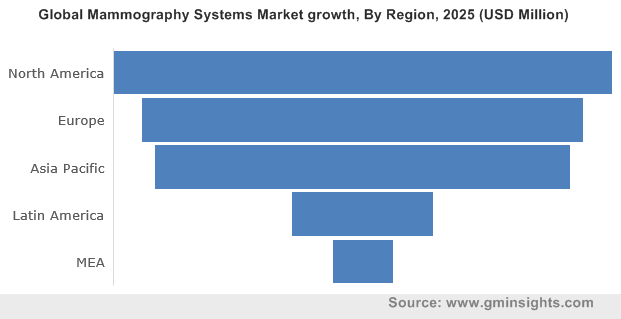 North America mammography systems market statistics is forecast to show significant 7.3% growth over the forecast timeframe. Increasing number of cases of breast cancer and immense technological advancements will significantly augment the regional market growth. Large number of market players are launching advanced imaging technologies in the U.S. market to effectively detect breast cancer. Also, significant decrease in the number of deaths due to breast cancer has been observed since 1989 owing to reduction in hormone replacement therapy in the country.  Thus, high awareness of early detection will play a major role in driving the North America mammography equipment market demand.

Adoption of sedentary lifestyle, delayed childbirth, excessive alcohol consumption and lack of awareness among women in India has led to growing incidence of breast diseases consequently driving the industry demand. According to the Cancer Care Hospital in India, one in twenty-two women develop breast cancer. Also, government and other organizations are creating awareness among the women regarding early diagnosis of breast disorders to reduce the mortality rate in India. In addition, increasing spending on diagnosis and treatment and reduction of social taboo on breast screening will assist Indian market opportunities in the upcoming years.

Mammography Systems Market research report includes an in-depth coverage of the industry with estimates & forecast in terms of revenue in USD from 2014 to 2025, for the following segments:

Mammography is an advanced medical technique used for early detection and diagnosis of breast cancer. It is a low dose X-ray technique designed to image the underneath breast tissues.
The breast tomosynthesis segment of mammography systems industry lead the market with $500 million revenue share in 2018.
The North American industry for mammography systems will achieve over 7% CAGR from 2019 to 2025, as estimated by GMI.