In-vivo Toxicology Testing Market size is expected to grow significantly from 2020 to 2026. In-vivo toxicology testing refers to the use of living organisms to check for the presence of toxic or carcinogenic chemicals in new substances and the effect of new substances on humans. These tests can also be used to confirm the absence of toxic chemicals from the drug or substance of choice. In-vivo testing is prevalent in the pre-clinical trials. 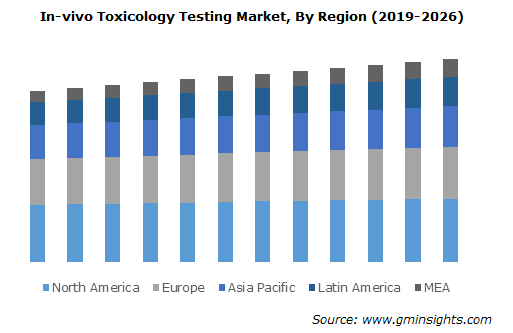 A growing demand for novel therapeutics has led to an increase in R&D activities to search for new drugs and vaccines. Animal testing is mandatory to determine the toxicology profiles of new drugs. Increasing research and development activities will boost the demand for in-vivo toxicology testing products. Furthermore, technical advances in animal models will foster the in-vivo toxicology testing market demand over the forecast period.

The in-vivo toxicology testing market is segmented into instruments, consumables, and animal models by product. The animal models segment will present lucrative market value and exhibit robust growth over the forecast period. Animal model segment includes animals such as mice, rats, primates and cattle, among others. The growing number of clinical trials coupled with the advancements in animal models will fuel the segment growth.

ADME toxicity testing will exhibit robust growth in the endpoint toxicity testing segment. ADME tests for absorption, distribution, metabolism, and elimination of a drug. ADME is crucial to drug screening, and it is estimated that almost half of all new drug candidates fail due to unacceptable efficacy. ADME also tests for drug-drug interactions, making it a cornerstone to clinical trials. Hence, ADME segment will exhibit significant growth during the analysis timeframe.

In-vivo testing is conducted in academia, clinical research outsourcing centers (CROs), pharmaceutical companies, cosmetic, food, and chemical industries. The pharmaceutical companies segment will exhibit strong growth over the forecast timeframe. A growing demand for novel therapeutics will fuel the demand for clinical trials of new drug candidates and boost the pharmaceutical segment. Furthermore, mandated in-vivo testing by the government will boost the segment growth over the forecast period.

Europe in-vivo toxicology testing market share will hold a significant value over the forecast period. The presence of a large number of research institutes across the region will drive the market expansion. Furthermore, increasing number of clinical trials coupled with presence of key market players in the region will propel the regional industry growth.

Some of the prominent players operating in in-vivo toxicology testing market share include Thermo Fisher, Danaher, Charles River, Covance, Jackson Laboratories, Taconic Biosciences Inc., etc. Market players are adopting organic and inorganic strategies to increase their market share, customer base, and consolidate their market share. For instance, in June 2019, Covance announced the acquisition of Envigo’s non-clinical CRO services. This acquisition enabled the company to expand its service offerings and strengthened the customer base.