Global Cast Polypropylene (CPP) Films Market size was valued at USD 1,359.4 million in 2020 and will showcase a growth rate of around 4.9% CAGR from 2021 to 2027 owing to the rising demand for flexible packaging from the food & beverages sector and growing flexible packaging sector along with rising demand for CPP films from the medical & pharmaceutical industries across the globe.

A cast polypropylene film is produced from various grades of polypropylene polymers. It is produced using cast technology without bi-axial orientation and is cost-effective, high-performance, low-density & transparent cast unoriented polypropylene film. CPP films are widely used in the packaging sector owing to the several benefits offered by these films including good seal strength, optical clarity & gloss, goof moisture barrier, and low static properties, among others. 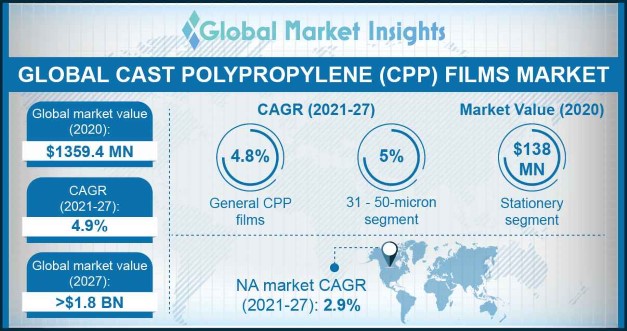 Food & beverage is a key application sector of cast unoriented polypropylene films across the region. The proliferating flexible packaging industry owing to growing demand from the food & beverages sector will drive the CPP demand over the forecast timeframe. The increasing demand for packaged food owing to changing lifestyles and increasing disposable incomes in emerging economies will drive the demand for packed food over the study timeframe. These robust growth indicators in the flexible packaging sector will subsequently boost the cast polypropylene films market share.

Rising demand for stationery owing to the growing educational sector and start-ups across the globe will further drive the global CPP films market. According to the National Association of Software and Service Companies (NASSCOM), India is the third-largest start-up ecosystem across the globe and in 2019, the country witnessed an addition of over 1,300 start-ups. CPP films are used in a wide range of office supplies such as folders, semi-rigid packaging products, etc. Stationery products require high clarity and CPP films fulfill this requirement in a cost-effective way.

Ongoing R&D activities to develop advanced CPP films, which are 100% recycled and will support the circular economy, will further showcase considerable growth over the forecast timeframe. For instance, in January 2020, Coveris introduced a CPP film for the packaging of food, pet food, and non-food products, The new material is a recyclable shrink film, i.e., 100% recycled, and will showcase the company’s goal to deliver recyclable flexible packaging solutions. Such recycle packaging solutions are gaining popularity owing to rising environmental awareness and stringent material waste regulations in developed regions across the globe. 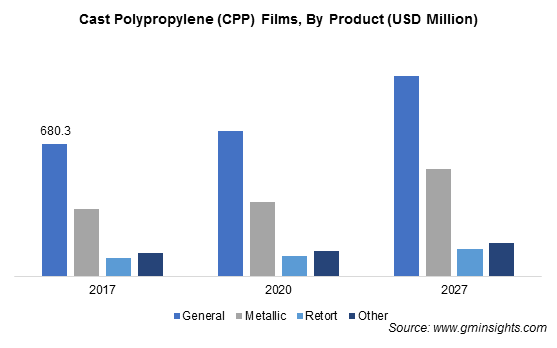 Metallic CPP films will showcase significant growth of around 5.5% CAGR from 2021 to 2027 owing to excellent seal strength and good moisture barrier properties of the material. Metallic CPP films have good gas & moisture barrier properties, which make them suitable in several food packaging applications. Furthermore, the development of new metallic films for food packaging applications will drive the growth of cast polypropylene films market segment over the forecast timeframe. The product has a good metal bond strength of around 450 gm/inch and is available in the standard 20 – 30-micron thickness range. 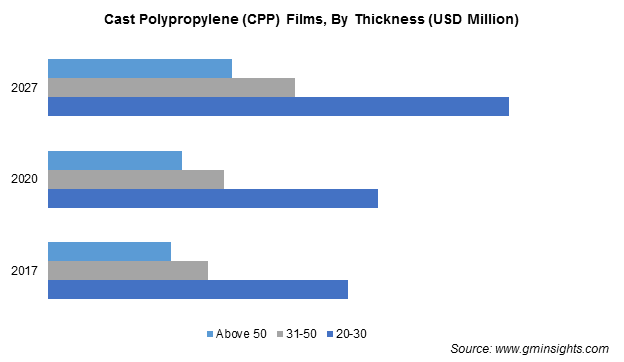 20 – 30-micron thickness CPP films dominated the market with around 51% volumetric shares in 2020 and are expected to hold dominance over the projected timeframe. This thickness in PP cast films is widely used in food & beverage packaging and is likely to exhibit higher growth owing to the rising food & beverages sector in Asia Pacific. The high flexibility of the product makes it more suitable for food packaging and other applications.

The food & beverages segment accounted for the largest chunk in the market, which has resulted in high demand for 20 - 30-micron thick CPP films throughout the study timeframe. Additionally, low cost and easy availability of the product will further fuel the cast polypropylene films market share in the coming years.

The textile application will showcase considerable growth and generate around USD 71 million in revenue in 2020. Increasing population, rising disposable incomes, and rapid urbanization in emerging economies, such as China, India, and Brazil and rising number of supermarkets and retail outlets in these countries is expected to drive the textile demand. This healthy growth in the textile industry will positively impact the cast polypropylene films market sales over the forecast period. 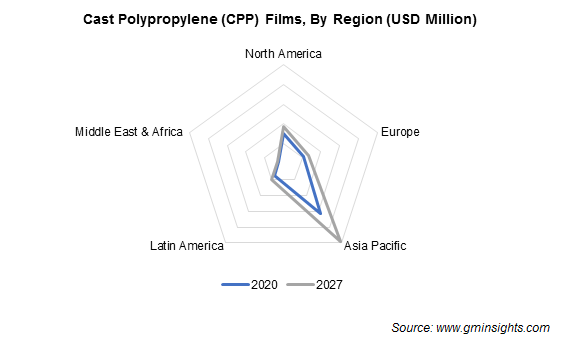 The North America cast polypropylene films market is projected to grow at a CAGR of around 2.9% during the forecast period. The rising food packaging industry owing to high per capita incomes, fast-moving lifestyles, and high working population in the region are some of the major attributes contributing to the regional growth. Additionally, increasing agricultural exports from the region will further support the consumption of CPP cast films. Advancements in technology and public & private sector investments in research are aiding the agricultural output in the region.

The cast polypropylene films market report includes in-depth coverage of the industry with estimates & forecast in terms of volume in kilo tons and revenue in USD million from 2017 to 2027 for the following segments:

The global industry size of cast polypropylene (CPP) films had reached over USD 1,359.4 million in 2020 and will record a 4.9% CAGR through 2027.
Metallic cast polypropylene films market size is anticipated to strike a CAGR of more than 5.5% through 2027 driven by higher penetration in food packaging applications.
In 2020, 20 – 30-micron thickness segment held close to 51% of volumetric shares and will expand significantly with the flourishing food & beverages sector in Asia Pacific.
The CPP industry size in North America is pegged to expand at a 2.9% CAGR through 2027 due to the growing per capita consumer incomes in the region.
Customize this Report
Inquiry Before Buying