Pharmaceuticals is another potential segment of CMC due to its use as an inert non-pharmacologically active ingredient. Additionally, the product will witness demand among manufacturers as an alternative to conventional additives in the coming years to meet the growing consumer demand for gluten-free desserts. 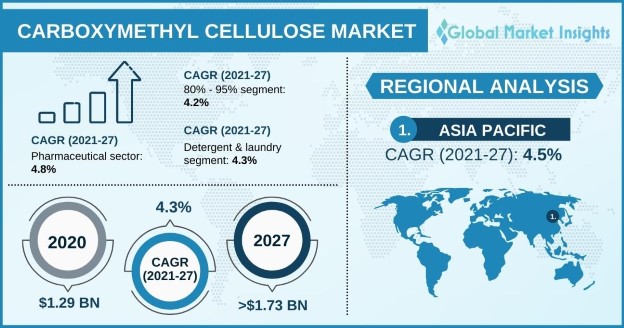 The COVID-19 pandemic continues to unfold steadily with severe effects on individuals, networks, and organizations. The development of some companies will be completely affected while various business sectors could remain strong and show promising development openings. The carboxymethylcellulose market is expected to grow at an extraordinary rate during the pandemic period as consumer interest in cleaning products is reaching an extraordinary level. This is due to the growing awareness among buyers about ordering and insuring against infectious diseases.

The growing threat of substitutes can be a major restraint in the carboxymethylcellulose market in the coming years. Few types of cellulose ethers, available at lower prices, have similar properties to carboxymethyl cellulose and can act as a substitute for the product in many applications. Possible alternatives of CMC include hydrocolloids such as guar gum, pectin, carrageenan, and ethylcellulose, microcrystalline cellulose, microcrystalline cellulose, etc.

The expansion of iron and taconite mining will also offer new growth opportunities for the carboxymethyl cellulose market. It is widely used in excavation flotation applications to isolate pollutants and metals. The developing interest in mining applications is expected to encourage the carboxymethyl cellulose market development during the projected timeframe.

Above 95% purity will showcase a fast-paced growth 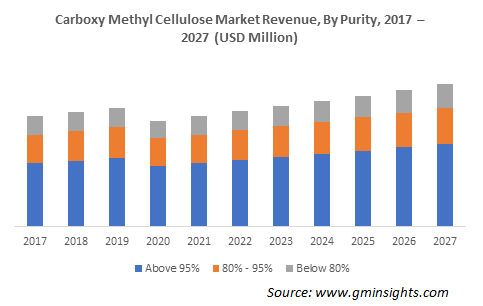 The carboxymethyl cellulose market from purity above 95% is anticipated to generate a revenue of around USD 1 billion by 2027, growing at a CAGR of around 4.4%. Above 95% indicates highly purified carboxymethyl cellulose, which is especially used in personal care, pharmaceuticals, food, and drinks. It is also used in other end-user industries such as detergents & laundry, pulp & paper, oil & gas, etc. Furthermore, strong demand for cellulose gum with purity above 99.5% in the food & beverage and pharmaceutical industries will further propel the overall industry growth.

The food & beverage sector is likely to showcase significant growth 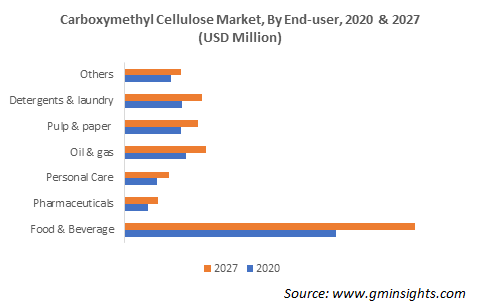 Based on end-user, the food & beverage segment accounted for above 40% of the market share in 2020 and will rise at a CAGR of around 4.7% through 2027. The food & beverage sector is continuously growing due to increasing demand for low-fat & gluten-free food products from developed regions.

Carboxymethyl cellulose is largely consumed in frozen desserts, dairy products, and sauces, among others. In addition, the growing desire for food products containing natural ingredients coupled with increasing levels of obesity has increased the demand for fat replacers in recent years.

The detergent & laundry segment has been one of the important end-user industries and is anticipated to generate a revenue of around USD 204 million by 2027, growing at a CAGR of 4.3%. CMC is added to detergent formulations, acts as a protective colloid, and prevents the reabsorption of dirt on the fabric.

There has been a shift in the way detergents are consumed as liquid detergents gain momentum compared to powder detergents in developed regions. The consumption of carboxymethyl cellulose will positively impact countries/regions, such as China, India, and the Middle East & Africa, in terms of detergents & laundry applications by 2027. 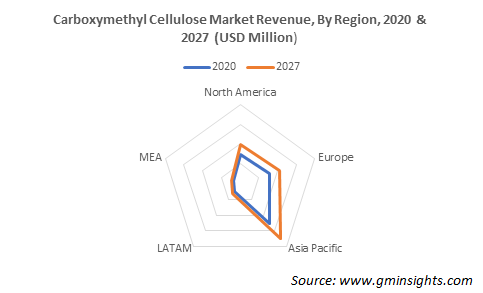 Asia Pacific is the key region in the global market and will witness a CAGR of around 4.5% from 2021 to 2027 owing to product demand in various end-use industries including food & beverages, cosmetics, and personal care. By 2025, the Indian food & beverage market is probable to emerge as the third biggest across the globe with strong prospects for the product in robust infrastructural developments.

With a 1.4 billion population, India was the world’s third-largest consumer of electricity in 2020, according to the International Energy Agency. The Indian government has been engaged in various initiatives aiming at 24x7 electricity by 2030. The nation has been working on solar parks in association with the World Bank, which will drive the demand for carboxymethyl cellulose in solar photovoltaic coatings.

The Latin America carboxymethyl cellulose market will generate around USD 132.8 million by 2027. The region has been observing improved distribution networks and demand for processed food along with the strengthening presence of multinational food & beverage companies in recent years. For instance, the food & beverage industry has been a significant contributor to the Brazilian economy. Brazil is one of the leading countries in the production and export of food & agricultural products. The product will find substantial usage in flavored food products and health drinks.

Some of the major players include in the carboxymethyl cellulose industry are Triveni Chemicals, J.M. Huber Corporation, Akzo Nobel B., DKS Co., Ltd., Ashland, Lamberti SA, etc. These companies have a stronghold on the market with positive brand images, thus creating a significant barrier for new entrants to the industry.

The carboxymethyl cellulose market report includes in-depth coverage of the industry with estimates & forecast in terms of volume in kilo tons and revenue in USD million from 2017 to 2027 for the following segments: