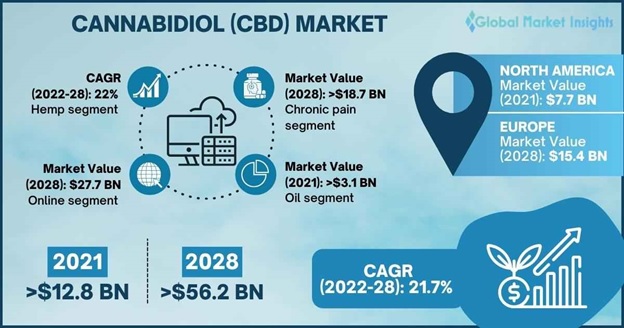 Supportive regulatory stance in majority of the countries paves way for the market growth. It also boosts the confidence of consumers to opt for alternative treatment methods that involve the consumption of cannabidiol. For instance, North America, particularly U.S., is one of the largest consumers of cannabidiol and marijuana/hemp derived products. This can be largely attributed to the introduction of Farm Bill in 2018 that legalized virtually every CBD based product consumed for medicinal and cosmetic purposes. The bill legalized cannabidiol products with less than 0.3% THC content across U.S. states. It also redefined hemp and hemp-derived products and augmented the market in the country.

Cannabidiol is one of the compounds derived from marijuana and hemp plants and is employed for medicinal purposes. Cannabidiol has been found to be effective against numerous disorders such as chronic pain, neurological pain, anxiety, sleep disorder, as well as nausea and stress. Hence, cannabidiol is gaining widespread popularity across regions.

The increasing cases across the globe and restrictive movement of people and goods have impacted the growth of every sector and every industry operating within. Large-scale organizations to small enterprises have witnessed a shrink in sales. While some areas of the healthcare sector remain to be impacted, CBD sales have increased since the advent of the pandemic. This is largely due to the fact that factors such as restrictive movement and isolation largely impact the human body in several ways causing chronic pain or propels the concerns surrounding mental health, among others. Hence, as consumers gain awareness about the benefits of cannabidiol as an alternative mode of treatment, it is anticipated to register a sharp demand from the consumers.

Further, several studies are also noted to remain underway to test the effectiveness of CBD-derived products against the lung damage caused by COVID-19. Hence, with increasing supply capabilities across the globe, the market is predicted to observe increasing demand during the forecast period.

The consumption of CBD is widely debated across countries. While countries in Asia Pacific and Middle East & Africa regions have shown restrain towards the widespread legalization of cannabidiol, countries in Europe and North America have had a fairly liberal stance on the same. Its proven therapeutic benefits have led to commercial approval from regulatory authorities such as FDA and Court of Justice of the European Union. The rising prevalence of cancer leads to an increasing number of patients undergoing chemotherapy and increasingly experience nauseatic conditions.

Further, as several people across the globe are noted to adopt a sedentary lifestyle, muscular disorders have also surged in the recent years. Cannabidiol products are noted to remain effective against these and are gaining popularity among patients. Also, it is observed that cannabidiol products undergo multiple clinical trials encompassing the treatment of numerous disorders such as neuropathic pain, among others. Hence, even though conventional medicine exists for the treatment of such illnesses, concerns surrounding its side effects are largely paving the way for CBD products in the market.

Even though the regulatory framework is noted to propel the market, several loopholes limit the potential growth of the industry across sectors. For instance, CBD products are granted access for medical and cosmetic use across geographies, regulatory authorities have resisted the approval of cannabidiol as a food & beverage additive. States such as Texas authorize the consumption of hemp-derived CBD-infused food and beverages, minimal recognition is observed on a federal level creating obstacles in the supply network and restricts the industry growth. 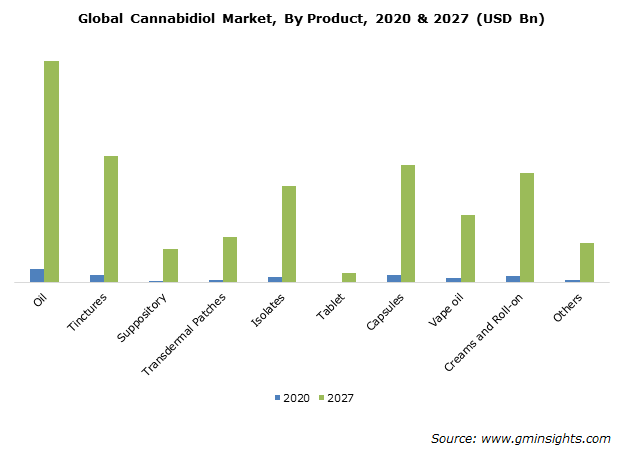 The CBD oil segment accounted for USD 1.7 billion in 2020. CBD oil is largely consumed across regions attributed to its extensive benefits, particularly for pain related disorders. As an increasing number of people are noted to adopt a sedentary lifestyle involving limited muscular movement, it has led to an increasing prevalence of chronic pain among adults. The significant disease burden of chronic pain is identified on a global level and it is set that nearly 1 in 10 adults suffer from chronic pain.

The chronic pain segment in the cannabidiol market will reach USD 36.5 billion by 2027. A considerable demand has been observed from cannabidiol products in recent years for pain treatment. This is largely due to the better results offered by cannabidiol products as well as its advantages over opioids. CBD is studied to have negligible trace of toxic compounds and minimal cases of side effects have been observed. As consumers gain awareness about the advantages of CBD over opioids, a significant preferential shift is slated to drive the demand during the forecast timeline.

The hemp segment is expected to expand at a 36% growth rate through 2027 led by the smooth regulatory pathways developed for low THC levels. The THC content in hemp pants is negligible and developing 100% CBD-based products is possible, resulting in a higher market proportion.

The offline distribution channel dominated more than 53% of the CBD market share in 2020 on account of the increased consumer confidence in offline purchases as compared to online channels. Further, as the penetration of counterfeit products increases, offline channels are largely preferred by consumers. As the market is noted to be in its infancy, the offline distribution channel is anticipated to account for a larger proportion throughout the forecast period, while its online counterpart expands with a relatively higher CAGR. 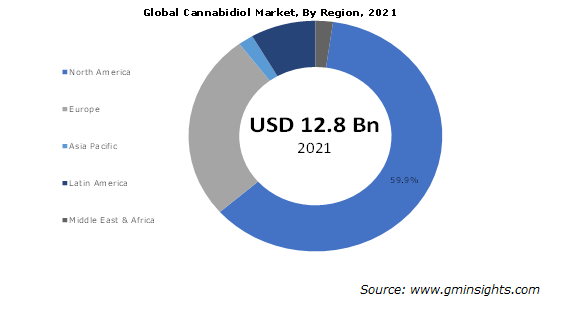 North America cannabidiol market size was over USD 4.3 billion in 2020. The region is expected to remain dominant throughout the forecast period in the consumption of CBD products. Several factors such as supportive regulatory framework, large-scale adoption offered by consumers as well as the higher intensity of suppliers in the region increasingly contribute to the sizeable regional growth. The growing geriatric population and higher disease prevalence also contribute significantly to the market demand in the region.

Prominent players operating in the market include Aurora Cannabis, Canopy Growth Corporation, Cronos Group, CV Sciences, Inc., Medterra and Tilray among few other players. Companies are noted to adopt organic and inorganic strategies to enhance their market presence and as well as gain competitive advantage in the industry.

The cannabidiol (CBD) market research report includes an in-depth coverage of the industry with estimates & forecast in terms of revenue in USD from 2016 to 2027, for the following segments:

The cannabidiol (CBD) industry size had attained more than USD 7.1 billion in 2020 and will expand at a CAGR of 35.7% CAGR up to 2027.
Annual revenue from the cannabidiol oil market exceeded USD 1.7 billion in 2020 and will grow commendably with higher adoption for pain-related disorders.
The CBD market share from the chronic pain application segment is expected to reach over USD 36.5 billion by 2027 owing to the higher benefits of the product over opioids.
Offline distribution channels accounted for more than 53% of the CBD market share in 2020 owing to the growing consumer confidence in offline purchases.
The CBD revenue share in North America recorded close to USD 4.3 billion in 2020 and will witness expansion through 2027 driven by increasing consumption of the products in the region.