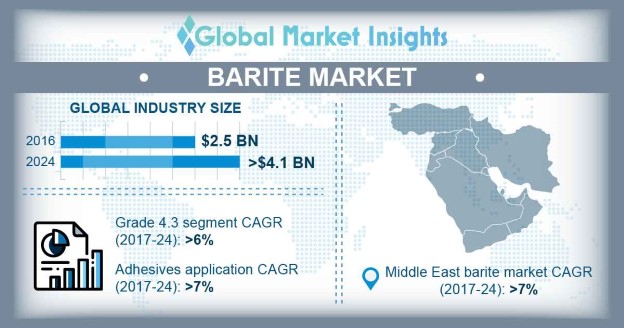 Barite market growth is owing to its increasing applications in the healthcare industry over the forecast period. It is largely used in various medical devices owing to its ability to absorb X-rays and gamma rays. Some other medical applications of product include, usage for filling and fixing of plaster. The healthcare industry is growing across the world at an unprecedented rate. It is due to the increasing investment in the industry, growing access of healthcare to a larger population and advancement in various medical fields. For example, the per capita expenditure is highest in developed economies such as the U.S., U.K., Germany, Canada, etc. Asia Pacific is slowly catching up to this trend with the impressive performance of economies such as India, China, Thailand, and Indonesia. According to the U.S. Department of Commerce, in 2017, the global medical device market was worth USD 390 billion, with the U.S. taking the highest share of about 40% of the total market. The trend is likely to continue in the near future, concurrently driving the product demand.

The limited resources coupled with increased cost related to its transportation is likely to hinder the product demand in the coming years. Moreover, the product extraction is economic only in China, due to cheap mining cost in the country. The product demand also faces challenges owing to the presence of a number of its substitutes, such as ilmenite, galena, hematite etc. which are more economical and provide a reduction in application’s operational cost. However, these substitutes are not widely used and currently, the product ensures to be the favored article of trade for this application as long as barite production remains robust.

Barite is generally found in colorless as well as colored forms. Its identification is done on the basis of specific gravity and hardness. The various product grades are decided on the presence of barite and other constituents. Grade 4.3 is likely to grow at over a 6% CAGR, owing to its applications in swiftly growing rubber & tire, healthcare, and paints & coatings industry. Grade 4.3 includes over 95% barite and its other applications include, television and computer monitors, radiation shielding, sound-proofing material in automobiles; traffic cones; brake linings, etc. High-grade barite such as 4.3 and higher are always in high demand due to their purity of content and better hardness. However, they are generally found as sedimentary deposits on the surface of oceanic plates. The high-grade barites controls the paleotemperature range of oceanic crust. The operational cost and difficulty in extraction result in lower availability of high-grade barite in the market.

The other lower grades find application in similar industries and aremore easily available in the market. Grade 4.0 is extensively used as a sizing agent, in the textiles industry. Additionally, it is also used as a surface smear for photographic and calendared paper. The market dynamics of applications such as oil & drilling is likely to impact the barite market growth over the forecast timeframe.

Barite is colorless or white mineral, often tinged with yellow, red, brown or blue. Its color segment is divided into white & off-white, grey, brown and others. The varied color range of products is utilized in a number of respective suitable applications. The brown barite is likely to grow notably on account of its use as a density filler in rubber, paper and plastic production. The growing demand for automotive, especially electric vehicles in Europe is likely to influence the brown barite use in tire production for these new vehicles in the coming years.

Barite is available in other colors such as orange, yellow, blue, red, etc. which are used in a number of applications such as textile, Adhesives, Paints & Coatings and Pharmaceuticals. The continual growth in these industries is likely to affect the product growth over the forecast period.

Adhesives is expected to grow at a CAGR close to 5.5% in the near future. It is due to the growing demand for adhesives in paper and packaging, industrial manufacturing, electrical and electronics, construction, dentistry, etc. The use of industrial adhesives in varied industries of the growing Asia Pacific is likely to govern the barite usage. On the other hand, the textile industry is growing at a steady pace in countries such as Brazil, India, the U.S., and China. Barite use in the textile industry is projected to grow as the sector grows in the coming years.

Middle East barite market size is the fastest emerging segment and is awaited to grow at a CAGR of over 7% during the forecast timeframe. It is due to the oil-based economies of these countries; the oil & drilling industry size is enormous in the region. It is likely to drive the product demand into the highest order in the coming future. Even though the European economy is converting to renewable-based resources, the oil will still be needed for the growth of the economic engine of Asia Pacific. Use of barite as a weighting agent in oil & drilling forms an important part in oil extraction technology, which signifies the growing market share of the application in the market. As the oil is discovered in regions other than the Middle East, the product demand is anticipated to grow consistently in those regions, over the forecast period.

Barite is an industrial mineral found in a limited quantity in nature. It is available in number of colors, such as white, blue, brown, grey or even in colorless state. It is classified on the basis of its specific gravity, available colors, and applications. Abundant product deposits are located in countries such as Spain, China, Australia, the U.S., the U.K. and Morocco. The product is also identified by other names, mainly, barite, heavy spar and desert rose.