The meteoric rise of solar tracker industry has been the subject of contention for a while now, given the extensive proliferation of solar power in the renewable energy cosmos. Solar energy presently stands nearly at the top of the energy mix pyramid, having contributed extensively toward the generation of power across myriad geographies, which is in fact, a major driver propelling the growth path of solar tracker industry. While PV panels have been taking precedence in the establishment of solar plants in the last few years, of late, trackers have been gaining renewed prominence, subject to their inherent capability to enhance the energy output by means of solar module movements – horizontally or vertically, toward the sun. As per estimates compiled by the U.S. Department of Energy, by the end of 2015, single-axis and dual-axis trackers jointly covered more than 50% of installed solar capacity – while the latter accounted for more than 5% of the installed capacity, the former accounted for more than 45% of the capacity. These statistics stand to prove that solar tracker market, with a capacity valuation of more than 12 GW in 2015, is certainly deemed to be circling along a profitable growth curve. 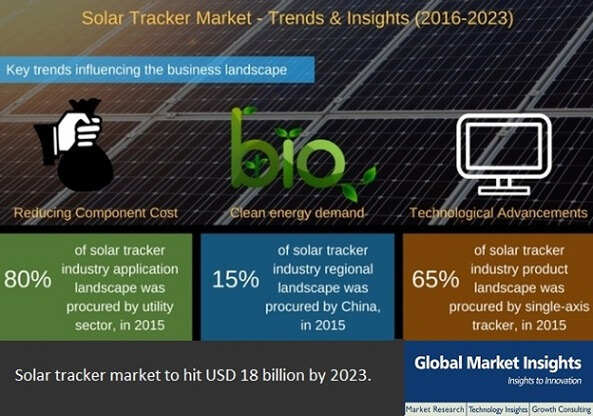 Being conceived as a rather progressive business space, solar tracker industry has established itself firmly among the higher-end industries of today. The fraternity is characterized by a plethora of collaborations and facility expansions, given the ever-growing demand for electricity across the globe. A recent instance of the same is that of the reputed solar tracker market firm, Array Technologies foraying into Latin America. If reports are to be believed, the company plans to expand its footprints across the LATAM belt by establishing a subsidiary in Mexico City and commercializing its single-axis solar tracker, DuraTrack HZ v3, in the Mexico solar tracker industry. Through this move, the company aims to lay the foundation of a fundamental shift in the country’s power consumption trends. For the record, Mexico has set ambitious goals with regards to sustainability - the country aims to generate around 35% of its energy supply via renewable sources by 2024, which is certain to augment the growth of solar tracker industry in the region.

Europe is one of the pioneers of renewable energy, and has an enviable pipeline of solar, offshore wind, and hydropower projects. The region stands to gain tremendous profits from solar tracker industry, given the proliferation of solar power in the region. Augmented by the commendable contribution from countries such as Italy, Spain, UK, and Germany, Europe solar tracker industry was valued over 2 GW in terms of capacity, in 2015. The renewable energy directive ‘2009/28/EC’ has a major role to play in the development of the regional solar tracker market, which is forecast to garner appreciable gains in the forthcoming years, propelled by the increasing number of initiatives undertaken by the regional companies, in addition to the rising awareness levels with regards to the benefits of solar power.

Two major solar tracker industry giants, Grupo Clavijo and Soltec, have chronicled their names in the Europe landscape, having contributed to a plethora of developments in the region, a few of which are outlined below:

The aforementioned developments form the tip of the iceberg, as the region is profoundly famous for a lot more solar projects. In effect, it would be wise to state that Europe solar tracker industry has a lot to contribute toward the global business landscape.

The APAC belt has in recent times, emerged as the hub for major businesses, subject to which manufacturers have been vying with one another to expand their footprints across the region. Asia has also exhibited considerable momentum in the renewable universe, with solar power occupying the top slot, which is likely to provide an appreciable impetus to the regional solar tracker market. The continent’s exceptional growth curve in solar tracker market is essentially hinged on India and China, catalogued among the most progressive nations in the region, which is reason enough for manufacturers to penetrate this geography. The pointers archived below depict the firm insistence of key solar tracker market players to establish their predominance in APAC.

With an appreciable number of nations contributing toward the development of the renewables sector, in addition to the innumerable industry moguls striving to expand their manufacturing facilities in the region, it is no more a presumption that APAC solar tracker market is indeed one of the most lucrative investment grounds for the future.

If expert opinions are to be believed, solar tracker market is one of those verticals of the solar space that has depicted a positively escalating growth graph so far. Trackers can apparently improve the solar output by at least 15 to 30 percent, which will undoubtedly upswing their sales. Furthermore, it is prudent to mention that a recently released research report forecasts that solar trackers of more than 37.5 GW are likely to be installed by 2021, which is a remarkable figure in itself. These installations will account for almost 50% of all the ground-mounted solar power systems, which will provide a substantially positive impetus to solar tracker industry. These statistics affirm that solar tracker market, with a target revenue estimation of more than USD 18 billion by 2023, is undeniably a force to reckon with.