The remarkable evolution from traditional electric meters to smart meters has guaranteed a profitable roadmap for global Smart electric meter market. The demand for power is rising at a very rapid pace, with the increasing industrialization and the changing living standards. However, it has been observed that energy supply fails to keep up with the demand and prices keep soaring. Moreover, to make matters worse, the environmental threats of greenhouse gases are choking the planet. 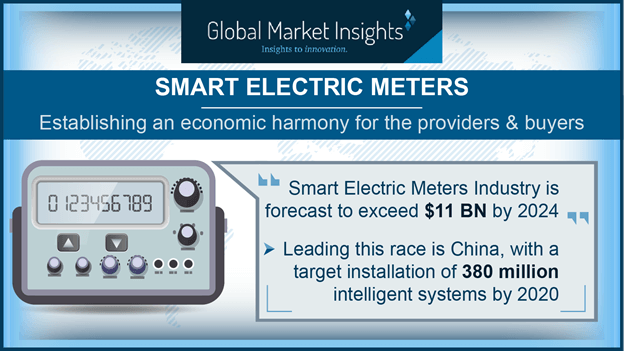 The one effective solution that seems to make its presence felt, is ‘efficient energy management’, even as utilities grapple to find an answer to the ongoing energy supply crisis. As a result, the governments, business leaders, and utilities are emphasizing on using smart metering solutions, which has provided a significant impetus to smart electric meter industry. Awareness of energy efficiency, latest trends in electricity markets, and climatic changes have led to a dramatic shift from the traditional electricity model. Smart electric meter market has been witnessing immense popularity as smart meters have been increasingly replacing the traditional metering systems. The global smart electric meter industry players are focusing on the deployment of smart metering techniques as it will lead to the installation of smart grids across the globe. The utility companies have recognized the necessity of designing smart electric meters to allow these energy efficient smart grid networks to secure and conserve the power supply. Thus, smart grids have given unprecedented opportunities to transform the energy industry and propel it into a completely new era of efficiency, reliability, and availability that will also contribute toward environmental protection. Smart electric meter market is thus, likely to be a major contributor toward the development of global smart energy market, as they will contribute toward turning smart grid projects into reality.

Smart electric meters are designed to record automatic readings and have the ability to capture & send electricity usage data via wireless technology to the electric company. This enables a convenient transmission of electricity usage and accurate billing by eliminating the manual meter reading errors, which is indeed increasing the overall consumer base, another major driving force behind smart electric meter market. Energy consumption can be further recorded every 15-minutes and can be uploaded to an energy management web portal. This can be useful in figuring out how different electronic appliances contribute to overall energy usage. The smart electric meters also send instantaneous alerts in situations of power outages, thereby allowing the electric company to locate and fix problem faster. This is likely to influence smart electric meter industry further over the coming years. These meters use radio frequency to communicate across various electric grids, thus providing real-time data that will be useful for balancing electric loads and minimizing power outages.

There has been a significant evolution from the first known electricity meter, patented by Samuel Gardiner in 1872 to the very recent smart meters. As per a smart electric meter industry forecast, this industry is slated to depict a rather lucrative growth path over the coming seven years. The metering side of the electric grid systems has been the focus of most of the infrastructure investments. Thus, as far as metering automatization is concerned, smart electricity meter market share is depicting a profitable growth curve, as the deployment of Automated Meter Reading (AMR) systems allows real-time and accurate reading. However, due to its one-way communication system, AMR is restricted to remote reading. Further technological advancements in the smart electric meter industry have led to the deployment of Advanced Metering Infrastructure (AMI) systems that not only provide utilities with bidirectional communication to the meter, but also with the ability of evaluating the status of the grid. The recent smart metering systems are working alongside smart sensors to allow utilities to perform grid control and management. This has generated a profitable revenue for both smart electric meter market and the global smart sensor market.

Smart electric meter market: The Present and the Future

Why smart electric meter market is witnessing such huge rollouts?

The European Union has asked its member states to ensure the deployment of smart metering under EU’s - Third energy market liberalisation package for internal electricity and gas market. The EU has also encouraged all the member states to rollout smart meters as a part of their effort to reduce climate change. The British government examined and adopted the aforementioned plan, as the study concluded that EU’s effort could cut emissions by up to 9%. This implementation may be subject to long-term CBA (cost-benefit analysis) and in case where the CBA is positive, there will be a rollout target of 80% by 2020.

It is no surprise that smart electric meter market size is expected to thrive, as the world is on the cusp of a smart meter revolution. This move is set to provide customers with data and transparency in energy consumption and magnify energy efficiency. Much of this work is being executed through the efforts of smart electric meter industry players such as Toshiba’s Landis+Gyr, Itron, and Silver Spring Networks, and smart meter system providers and integrators like Oracle’s DataRaker and Siemens’ eMeter.