The Impact of Robotics Technology on Urbanization: Automated Cities on an incline

Robotics technology is set to metamorphose the urban spectacle of the planet. Ever since its inception, cognitive automation technology research has been on a steady upsurge. Industry giants are constantly on the move to deploy robots for every manual task, especially across the manufacturing and industrial sectors. Robotics technology coupled with the Internet of Things has resulted in the creation of the “smart” era, which is a key revolution of this century, enabling superior convenience for the public across the world.

Global spending on robotics technology is predicted to cross USD 130 billion by 2019, with a CAGR estimation of more than 15% over the years to come. Technology giants are diversifying their product offering and expanding the regional robotics industry to offer a seamless consumer experience across the globe. For instance, Starship Technologies has delivery robots deployed in 58 cities across 16 countries for delivery services (food, shopping, etc.) 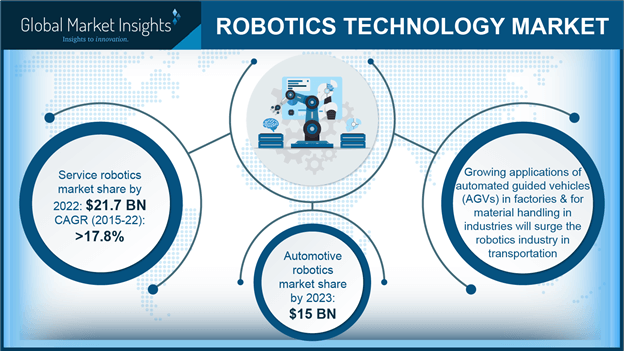 The notion of using robots for cities has been recent, considering that the idea was in the pipeline for several decades, as witnessed by the numerous science fiction literature and movies.  In a bid to ease the inconvenience and heavy workload, the robotics technology was initially deployed to be implemented in the manufacturing industry. With the proposition of smart cities, however, robots will soon find their way into cities, for various applications such as logistics, transportation, and household, which in turn, is spurring global robotics market.

With an estimation of more than 75% of the global population moving to cities by 2050, it is no surprise that the robotics technology is rapidly paving its way to perform sophisticated tasks more efficiently than the human counterparts. Robots use a combination of GPS, radar technology, and cameras to navigate through the cities. While this trend has still not reached the core masses globally, delivery robots are a regular phenomenon in cities such as San Francisco, Tokyo, Munich, Seoul, and Boston. They are high-tech, technology-driven options derived from robotics technology that can be used for tasks such as package delivery and shopping.

Rising demand for robotics technology across various sectors is bound to stimulate global robotics industry. The significant growth of the automotive sector coupled with increasing consumer requirements will act as key drivers for automotive robotics market, which is expected to cross a revenue of USD 15 billion by 2023. Robots performing tasks such as painting, assembling, welding, and dispensing will propel automotive robotics industry to great heights.

Deploying robots for cities involves their adoption across personal and professional service applications. Automated robots are increasingly being used in the medical, logistics, military & defense, mobile platforms, construction, household, and entertainment sectors. Driven by this factor, service robotics market size is anticipated to hit USD 21.7 billion by 2022, with a CAGR projection of more than 17.8% over 2015-2022.

Let us discover some of the principal sectors deploying robots for the urban landscape:

The logistics sector has witnessed a tremendous upswing in the implementation of the robotics technology for tasks such as picking, packing, and shipping. Top companies are increasingly using robots to enhance the efficiency of packaging and shipping operations. For instance, Amazon deploys more than 40,000 robots to handle their logistic operations in warehouses. These robots have the capacity to pick objects weighing more than 300 kg and move at a tremendous speed while hauling heavy packages. These robots will help reduce the costs for picking and packaging, which in turn is likely to profit Amazon with a price reduction of close to USD 850 million annually.

Other shipping and freight companies are also on the move to implement superior robots to handle their logistics operations. Constant innovations in robotics technology are vital to this industry. For instance, DHL’s specialized warehouse robots – named Toru, have strong grippers to conveniently navigate between shelves, one after the other, to pick items off and deliver them in one go, reducing time and effort.

Applying robotics technology for security is the most obvious choice for smart cities. In the decades to come, robots are likely to function as cops, performing duties such as criminal tracking, security checks, traffic monitoring, fine issuing, etc. In countries, such as China, security robots embedded with powerful sensors are being deployed across railway stations and airports, for the purposes of fire warnings, security checks, facial recognition, etc. Reliable sources report that robots are likely to comprise approximately a quarter part (more than 20%) of the Gulf police force by 2030. Such initiatives are obviously a part of making the cities ‘smarter’, by means of a computer-controlled police service.

Robotics technology has already created a phenomenon in the transportation sector, with the advent of autonomous cars. In addition, service robots will be programmed to take over tasks such as welding and painting, which will push the automotive and transportation market over the years to come. With carpooling service demands on a resolute high, robot taxis may stimulate car sharing market globally. One robot car is estimated to replace more than 15 privately owned cars by 2050.

Automation is set to change the dynamics of the transportation sector. Efficient computer controlled devices for system monitoring and maneuvering the vehicle as required will heighten the sophistication of smart cities, in addition to safe and convenient travel. In addition to driverless cars, driverless buses and trains are also set to influence the urban landscape. For instance, Australian mining magnate, Rio Tinto, in 2014, had already invested more than USD 510 million in driverless freight trains for transporting tons of iron to ports over long distances.

Growing applications of automated guided vehicles (AGVs) in factories and for material handling in industries will surge the robotics industry in transportation.

The food & beverage industry, undoubtedly, will foresee the deployment of a huge number of automated robots. These machines will undertake the tasks of food coating (finished products), mixing food constituents, packaging, labelling, transporting, shipping, local delivery, and many, many more. Advanced software robotics technology coupled with external sensors will help detect the humidity, temperature, and air quality for processed foods. It is estimated that robots are likely to take over fast food jobs in the next 1-2 decades or so.

Industry manufacturers state that automation in the F&B industry will directly impact bottom lines in long run, owing to which they are rigorously involved in mergers & acquisitions and strategic collaborations with technology giants to integrate the robotics technology with food services. For instance, Chowbotics invested USD 5 million in robotics to make use of automated robots for providing efficient food delivery, cleaning, and other food-related services. It is expected to target end-users such as restaurants and cafeterias, and more such robots are projected to follow.

Robotics technology can be widely used for public administration tasks such as street maintenance, garden maintenance, park cleaning, garbage collection, assisted healthcare, household cleaning, etc. Robots will be massively adopted to check water networks across the city (for the presence of gases and other harmful substances), inspect landfills, check on offshore windfarms, etc.

Reliable sources state that inspection robots will be technically programmed to take over the operations of more than 800,000 public sector jobs in Britain by 2030. This implies that a remarkable amount of GBP 17 billion may be saved from the overall public sector spending.

The Future of Robotics technology for Cities: Are we on for a smarter urban scenario?

The concept of implementing robotics technology for cities is no longer novel. With astonishing product innovations and newer arenas requiring automated robots, global robotics industry will continue to depict a remarkable upswing over the years to come, despite the restraints of high cost and technical flaws. Robotics technology is forecast to be deployed across multiple applications for infrastructure management, public administration services, information management, law enforcement, immigration control, street and utility maintenance, etc., to develop “smart cities” all over the globe.

The wheels have already been set in motion for the expeditious development of smart cities using robotics technology across the globe. The current Prime Minister of India, Mr. Narendra Modi, had launched the Smart Cities Awas Yojna Mission in 2015, with a view to develop numerous smart cities in the nation. The Indian Cabinet has already approved a massive revenue of more than USD 950 million toward this project. With such government initiatives and more to come, it wouldn’t be wrong to state that this multi-billion-dollar robotics market is slated to rapidly transform the urban scenario.

Global Market Insights, Inc. has a range of reports on smart and sustainable technologies available at https://www.gminsights.com/industry-reports/sustainable-and-smart-technologies .