With consumers making a transformative shift toward natural products, plant based ingredients market has generated quite a momentum in the food & nutrition ecosystem. Already having registered itself as a trillion-dollar business fraternity, the consumption pattern for this industry is anticipated to soar high in the coming short to medium run. In a recent turn of events, China released its revised dietary guidelines which focuses on cutting meat consumption in the diet and replacing it with plant based counterparts. The guideline comes on the heels of the obesity and diabetes pattern observed in the regional demography, which is indeed on the higher end. 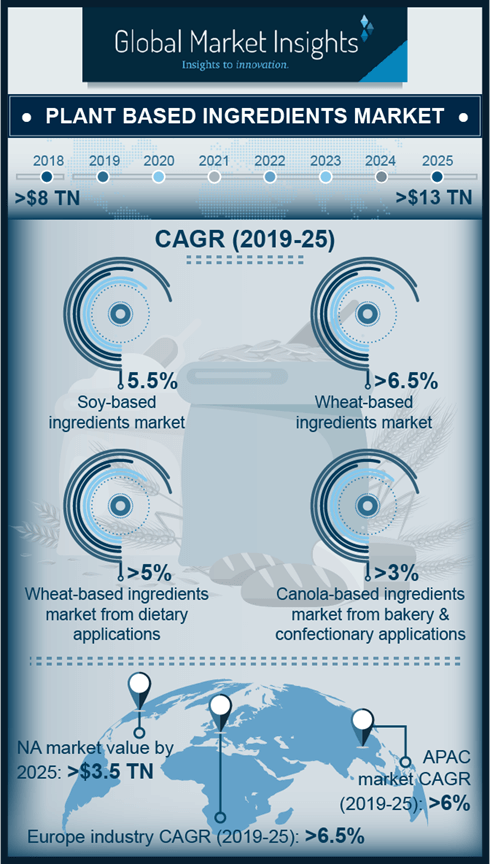 Reportedly, more than 110 million people in the region are diabetic and more than 25% of men and women each fall under the category of ‘obese’. With this guideline in effect, the government expects to save approximately 8 million lives by 2050. Not only this, the regulation is also expected to have a staggering impact on the climate and healthcare costs, where it is anticipated to reduce the food-related greenhouse gas emissions by 2/3rd and save more than a trillion of cost incurred due to healthcare and climate damages.

Canada is apparently following China’s footprint which is validated by its revised dietary guidelines emphasizing on increasing plant-based diet intake. In fact, Australia, which is touted as one of the largest meat consuming regions is also cutting on its meat consumption ratio. In 2016, nearly 12% of food products launched in Australia had a vegetarian claim while 6% displayed a vegan claim. The instances are a glimpse of the enormous pool of opportunities lying ahead for the plant based ingredients industry players. Not to mention, most of the plant-based food products recorded a double digit growth in terms of sales in the previous year.

The applications lying ahead are massive with novel domains such as cosmetics proving to be potential revenue arenas along with the conventional verticals such as dietary supplements, animal feed, food & beverage, etc. already escalating the demand graph. Experts predict that 2019 is expected to be one of the benchmark years for the developments in plant based ingredients industry. With regulatory focus toward encouraging organic diet, rising participation by the industry veterans toward introducing healthy and nutritious products, and a slew of R&D investments toward enhancing the scope of the plant based counterparts, the worldwide landscape is anticipated to witness a myriad range of commercialization prospects over the coming years.

Entailed below is a list of top three trends prevalent in the plant based ingredients market in Q1 2019:

Standing as a testimony to the above trend, Motif Ingredients, the spin off unit of Ginkgo Bioworks, Boston based biotech company, introduced its fresh idea of creating plant based proteins catering to the food development startups and biggies worldwide. The idea behind the move is to identify the vitamin and protein content in foods such as meat and milk and then produce a similar compound with engineered yeast and bacteria by fermentation process. The move was presented as a solution for the food startups as well as established F&B giants where they could cut on the technicalities and R&D costs and utilize the complementary protein produced by Motif, which the company claims to be affordable and healthier.

Reportedly, for the venture, the company raised $90 MN in its Series A round, which is touted as the largest funding by a food-technology company till date.

Plant based ingredients industry is exploring opportunities beyond the conventional verticals including F&B and nutrition and Roquette’s latest foray in the cosmetics industry is a validation of the trend. The France based food and nutrition giant recently launched its beauty range Beauté by Roquette, offering a series of innovative, high-performing, and natural cosmetics. The move is claimed to strengthen its partnership with Sytheon, the U.S. based innovative specialty ingredients firm renowned in the personal care industry. It is prudent to mention that Roquette made its debut in the beauty sector a year ago and this latest investment is a strong support to the company’s vision of getting a hold of the expanding plant based cosmetics ingredients industry.

The company also quoted its plan to open a laboratory and collaborative space in the Paris Area in 2020, as an initial step to expand its visibility in Asia, Europe, and America.

With the demand for protein content in animal feed soaring, companies are striving hard to explore new protein sources to ensure a healthy and nutritious diet. Arcadia Biosciences recently made it to the headlines with the announcement of receiving FDA approval for SONOVA® GLA Safflower Oil in Cat food. The agricultural food ingredients market player claims SONOVA as the most concentrated, reliable, and cost-effective plant source of GLA, which is touted to be an essential ingredient in improving the immune system, metabolism, and skin health in animals.

Reportedly, SONOVA is the only plant based source of GLA having received an approval for its use as an ingredient in the pet food across the United States. The move is deemed to be a response to the rising consumer demand for natural and plant based ingredients in the animal feed industry.

With the beginning of 2019 charged up with the aforementioned trends, the road ahead for plant based ingredients industry is geared up for a slew of R&D investments and technological breakthroughs. A much anticipated trend remains the emergence of food-tech startups and the change of dynamics they bring onboard to the competitive hierarchy. In terms of commercialization potential, Global Market Insights projects the worldwide plant based ingredients industry share to surpass a valuation of USD 13 trillion by 2025.