Over the recent years, gas turbine industry share has witnessed a remarkable progression across the globe owing to the rapid pace of industrialization, burgeoning demand for clean energy, rising availability of natural gas, massive R&D investments by private entities, and swift transformation in market conditions among others. Furthermore, the recent upsurge in environmental concerns in developed and developing economies across the world has resulted in intensified efforts by government and private institutions to fundamentally alter the development trajectories by ensuring climate resilience and increased measures to curtail greenhouse gas emissions. As a consequence, these global efforts have markedly influenced the expansion of gas turbine market and are bound to play a pivotal role to further enlarge and proliferate this business sphere over the ensuing years. Moreover, statistics affirm the aforementioned statements- the overall gas turbine industry size in the year 2016, was forecast to have held a total valuation in excess of USD 13 billion. Needless to say, the rising desire for better social and economic development around the world shall fuel the demand for clean, affordable, and reliable electricity supply, which would, in turn, embellish the growth potential of the global gas turbine industry size over the estimated time frame. 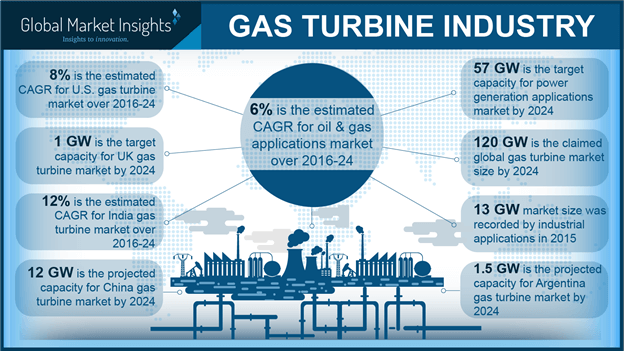 One of the most decisive driving forces of the gas turbine industry has been the heightened inclination of the government and private entities toward replacing the existing conventional fossil fuel based power plants with renewable energy based power generation facilities. In consequence, this has brought in a drastic change in the outlook of leading gas turbine industry players, who are now increasingly aiming to intensify their efforts toward expanding their existing power generation facilities and fortify their presence in highly combative gas turbine market space. Siemens AG, for instance, has been awarded a massive contract of 700 million Euros by the Libyan government to construct 1.3 GW of open cycle electricity generation facilities. This is in addition to the German conglomerate’s recent agreements with Iraq government, in which the firm has agreed to upgrade four power generation plants to ensure reliable and safe electricity to augment the on-going efforts of the crisis-ridden nation in safeguarding its energy requirements.

Below mentioned are a few significant factors that are bound to propel the global gas turbine industry share:

Building on the successes of the Millennium Development Goals, the United Nations Development Programme is now emphasizing upon the Sustainable Development Goals, that came into effect in January 2016. Apparently, these goals shall direct all the efforts of approximately 170 nations and territories of the world in realizing the noblest objectives such as providing affordable and clean energy to all the households and communities, reinforcing and refining climate action strategies, and achieving sustainable development across major cities among others. Apparently, the fulfillment of all the aforementioned objectives necessitate a large-scale deployment of renewable energy sources to generate electricity. In addition, the increased focus on lowering global carbon footprint by reducing the reliance on conventional energy sources has had an optimistic impact on the gas turbine market growth.

Speaking in the similar context, the recently concluded Paris Agreement called for a comprehensive list of commitments, named as the Intended Nationally Determined Contributions (INDCs) under the aegis of the United Nations Framework Convention on Climate Change (UNFCCC), from every member state of the United Nations to outline their post-2020 climate actions. It would be prudent to cite that the agreement aims to constrain global warming to 1.5 to 2 degrees Celsius above pre-industrial levels. Owing to these INDCs, all the member nations of the UN are now equipped with definite action plans of their own which have compelled them to accelerate the pace of acceptability of renewable energy sources, in which the global gas turbine industry holds a vital responsibility.

Elaborating further on the gas turbine market trends, the abundant production of natural gas, especially in the U.S., has significantly boosted the ascendency of gas-fired energy generation plants over the traditional coal-based production systems. According to a few authentic estimates, the global natural gas production has shot through the roof with their availability accentuating from 2791 billion cubic meters in 2005 to 3539 billion cubic meters in 2015, with the U.S. being the foremost nation with 767 billion cubic meters of natural gas production in 2015. Moreover, a comprehensive research undertaken by the U.S. Department of Energy’s National Renewable Energy Laboratory demonstrated that the nation is capable to generate most of its electricity from renewable energy sources by the year 2050. Evidently, the U.S. federal government is aiming to diversify its energy portfolio by procuring around 30% of the total energy requirement from gas-based power plants by 2025.

Speaking of the Asia Pacific region, the emerging economies such as India and China are set to drive the gas turbine industry share in the forthcoming years. In fact, India gas turbine market is forecast to grow at a CAGR of over 12 percent over 2017 - 2024. The top-most policy think-tank of the Indian government, Niti Aayog, in its recently unveiled draft National Energy Policy has intended to accomplish an ambitious target of 175 GW renewable energy capability by 2022 and diversifying its electricity mix in the overall energy requirement of the nation by augmenting the share of renewables at over 40 percent by 2030.

Apparently, it is quite evident from the aforementioned declarations that the global gas turbine industry is set to witness a paradigm shift in its remuneration portfolio down the line.

While observing the recent trends pervading the gas turbine market, it can be noticed that the awareness levels, pertaining to the deployment of gas turbine technology, are on the rise across nations. In consequence, this has placed the onus on industry giants to enhance and upgrade their product range to meet the growing demand for highly-efficient gas turbines. The leading gas turbine industry players appear to have geared up to tackle this challenge, with a few firms taking upon themselves to refine the current gas turbine technology. Below are a few instances that stand testimony to the aforementioned declarations:

Considering the aforementioned aspects, it is quite imperative to note that gas turbine market is yet to explore a plethora of possibilities on a global scale. Apart from power generation sector, gas turbine industry is also broadening its application spectrum across the aviation, oil and gas, manufacturing, marine, automobile, and defense industries. Concurrently, the growth in these sectors is overt to leave a perpetual impact on the gas turbine industry share, cite experts. In terms of commercialization, global gas turbine industry size is forecast to exceed a valuation of USD 23 billion by 2024.