Electric motors industry to be characterized by a cutthroat competitive scenario across a widespread regional landscape: India to stand tall as the next hotbed for market growth

In an era that has been consistently reiterating the significance of emission reduction, electric motors industry has indeed been occupying a pivotal stance in the global automotive space. Having recognized that fossil fuels are soon on their way to extinction, potential contenders across the global industrial realm have been scrupulously planning a future thriving on electricity sans fuel deployment. This pointer effectively justifies the hoopla generated around subjects such as reduced power consumption, energy conservation, optimized electricity usage, and the like. Reliable estimates convey that globally, electricity usage is likely to cross the astounding frontier of 35 trillion KWh by 2035, more than 25% of which has been projected to be consumed by electric motors. It is subsequently quite coherent that with the robustly increasing demand for electricity from every industrial domain, electric motors industry size is likely to depict an ascent. This presumption is amply validated by the forecast compiled by Global Market Insights, Inc., which claims electric motors industry size to have been pegged at USD 21 billion in 2016.

Electric motors debuting in the global industrial arena may have been quite a breakthrough back in the day, however, as on today, these components have extensively broadened their scope of application. Pertaining to their deployment in a slew of devices, subject to their highly efficient rotational properties, industrial electric motors market has been experiencing a rather profound growth rate since its inception. As the wheels of the century turned and smart technology has made its presence felt, a paradigm shift has been observed from conventional motor design and deployment to smart devices – a trend that has provided a substantial impetus to the overall industrial electric motors market. 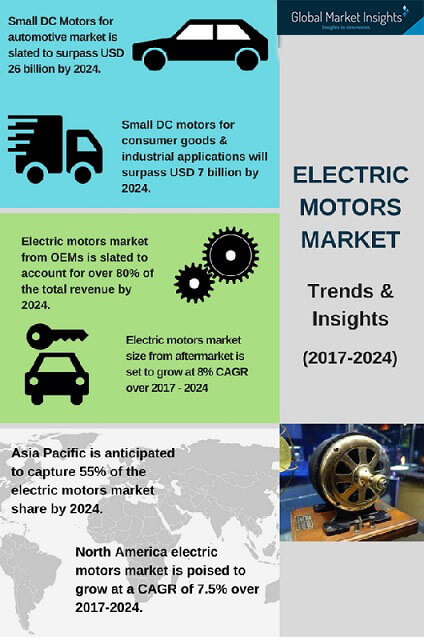 Having minutely scrutinized the impact of technology, manufacturers have been on the go to develop motors that would consume lesser energy and exhibit high efficiency, at reduced costs. A recent precedence of prominent electric motors industry players breaking the mold of traditional components and inclining toward manufacturing smart motors is that of Tata Motors planning to showcase a portfolio of six electric vehicles in the Auto Expo to be held in February 2018. Quoting a reliable spokesperson, the company, beginning this year, aims to focus on the deployment of integrated smart mobility solutions in connected cars, targeting India's smart cities. This would invariably pave the path for extensive product demand, in consequence, generating a rather lucrative growth avenue for India electric motors industry.

Tata’s proposed exhibit brings to light a rather pivotal factor – how the emergence of electric vehicle market has been influencing the growth of electric motors industry. As per estimates, the adoption of EVs has been on an all-time high lately, driven by the robust demand for emission-less vehicles and the presence of a stringent regulatory landscape mandating pollution control standards. Globally, EV market has been registering a rather appreciable growth rate, subsequently paving an opportunistic path for electric motors industry expansion in the ensuing years. Bearing testimony to the aforementioned fact is the abundance of companies going the whole hog to penetrate the EV business space – recently for instance, Alibaba, the Chinese eCommerce giant, participated in a fundraising round worth USD 348 million to purchase the EV manufacturer, Xiaopeng Motors, thereby officially marking its successful debut in China industrial electric motors market. Alibaba’s liaisons with smart automobile tech firms such as Ford and BMW, further validate the fact that the extensive growth of EV business sphere and the massive adoption of smart solutions in the automotive space are indeed the key to the expansion of industrial electric motor industry.

Already having retained a commendable proportion of authority in industrial electric motors market, the United States currently stands as one of most profitable growth avenues of this business space, primarily on account of the heavily expanding EV production base in the country. As per a United States industrial electric motor systems market opportunities assessment report, the nation holds the key to the expansion of North America electric motors industry size, slated to cross around 378 million units by 2024. The massive scope that the U.S. holds to advance its contingency in industrial electric motors market is evident from the fact that practically every state in the nation has set an EV target to be accomplished for the next decade. Say for instance, California looks forward to achieving its goal to have 1.5 million EVs on the road by 2025 – which is rather overt from the fact that the state boasted of encompassing more than 337,482 ZEVs as on 2017.

A motor systems market assessment study claims that the United States will continue to retain a humongous percentage of the overall electric motors industry, given that at present, the nation houses 35 EV manufacturing firms, inclusive of renowned biggie such as American Honda Motor Company, Tesla Motors, and Chrysler LLC. Tesla’s recently-announced Model 3 has already caused a stir in U.S. industrial electric motors market, having generated more than USD 13 billion in revenue, unrestrained by the fact that Model 3’s production will be completed only by 2018. Ergo, it is evident that industrial electric motors industry outlook in the United States will witness a dynamic transformation of sorts, driven by sizable investments in electric vehicles.

Electric motors market in India: The emerging nerve center of the Asia Pacific

While China has already accrued a percentage of supremacy in electric motors industry, India seems to be gearing up to emerge as the next potential growth ground for this business space. A reliable motor systems market assessment report actually states that Asia Pacific may plausibly dominate the overall electric motors industry over 2017-2024, with a target revenue anticipation of over USD 20 billion. APAC’s projected dominance may be attributed to the robustly expanding automotive sector across the emerging economies of India and China, that has currently been undergoing a humongous transition of sorts. This shift essentially comes in the wake of the global pressure to become completely electrified economies in the next few decades – a raging trend that is driving India electric motors market. Not to mention, the country boasts of regulatory backing, with the Modi government announcing a long-term EV production policy, spearheaded by paramount industry leaders, that is expected to further catalyze India electric motors industry. A succinct outline of the developments underlining electric motors market in India has been elucidated below, which would indeed validate why India is the most viable contender for the growth of industrial electric motors market:

Endorsed by a strict regulatory backup mandating 100% electrification by the middle of this century, industrial electric motors market is indeed on its way to emerge as one of the most lucrative verticals of the automotive & transportation business space. Not surprisingly, prominent automakers, empowered by the benefits provided by these motors for EV production, have been going the whole nine yards to explore the plausible innovations in motor production. An in-depth motor systems market assessment indeed delineates that motors equipped with heavily advanced features such as lowered efficiency loss, ultra-compact size & shape, meticulous shaft design, clutch integration facility, etc., are likely to define the future of industrial electric motors market. What is noteworthy about these prospective design permutations is that they are deemed extremely ideal for hybridizing the existing line of vehicles. In consequence, this would expand the hybrid vehicle production line across the globe, inherently increasing the demand for electric motors, and by extension, providing a major boost to the global industrial electric motors market.

Following the example set by Nissan LEAF, the first EV that was marketed at the grass-root level, top-notch automotive biggies have been striving to penetrate electric motors industry across numerous geographies. Estimates claim that more than 300,000 vehicles of the Nissan LEAF have been sold since its launch in 2010 – a benchmark that has served to increasingly propagate the manufacturing of electric motors for EV production. Merely a quarter ago, for instance, Volkswagen made it to the headlines for having declared its decision to officially penetrate electric motors industry, with the commencement of EV production in 2023. Armed with the intent to foster sustainability across the globe via lowered C02 emissions and to bring about a fraction of formidable efficiency in the automotive sector, electric motors industry players have indeed been bending over backward to ensure the launch of highly innovative products sans manufacturing failures. In the decades to come, electric motors industry, in all likelihood, will emerge as a pivotal niche vertical commanding global attention among pervasive industries and regulatory agencies alike.